Organisers of the annual Antepavilion commission in London are fighting to prevent “oppressive” Hackney Council from demolishing a series of subversive canalside pavilions.

The local authority is demanding the removal of a series of architectural structures at Hoxton Docks on Regent’s Canal in east London, built as part of the annual competition run by arts and architecture charity Antepavilion and organised by the Architecture Foundation.

The council has issued a demolition notice for the several Antepavilions plus other rooftop structures, none of which have planning permission, because they “detract from the architectural integrity of the 1960s warehouse they sit on,” said the Antepavilion organisers.

The structures at risk include a rooftop room disguised as an air duct by PUP Architects, a three-storey rooftop theatre by Mach Swift Architects (pictured above), and an inflatable performance venue on a barge by architects Thomas Randall-Page and Benedetta Rogers.

“Hackney Council has issued a demolition notice to Antepvaillion, ordering the removal of all the existing installations that have brought joy to the people of London,” they wrote on Instagram.

“Meanwhile, they have been ignoring all the representations to save Antepavilion coming in from supporters worldwide.”

The Antepavilion team is contesting the demolition notice.

The demolition notice follows the council’s move to stop the installation of this year’s pavilion, which was due to feature five floating fibreglass sharks designed by architect Jamie Shorten.

Last month it issued a court injunction the eve of the pavilion’s opening, blocking the installation of the fifth shark, which remains on dry land. 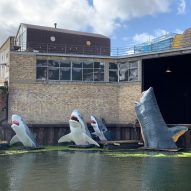 At the time Russell Gray, whose property company Shiva owns the Hoxton Docks venue where all the Antepavilions have been built explained how the pavilions were designed to comment on the planning process.

“Part of the brief was engagement with the planning system and some of the nonsense that besets it,” explained Gray.

“You get this kind of situation where they haven’t then got a rulebook to follow, and so they go off on their own mission, which is largely driven by their own egos.”

In a separate development, a dance performance at Hoxton Docks last week was shut down by the police.

On 1 September Distdancing, a free public performance by furloughed dancers from the Royal Ballet, was stopped by officers claiming the audience watching from across the canal from the stage had broken social distancing rules.

Antepavilion has had a contentious relationship with planners since its inception, with the structures often testing the boundaries of planning law.

The first Antepavilion in 2017 was a room disguised as an air duct intended to highlight the “hypocrisy” in planning decisions that allow ugly air-handling systems to be added to buildings without planning permission. 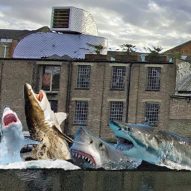 The year before developer Shiva, which owns Hoxton Docks, was denied permission to build a beach house on its rooftop as an art installation – but built it anyway.

This year’s pavilion was designed to draw attention to conflict with planners, referencing the battle over the Headington Shark, another fibreglass fish that is embedded in the roof of a terraced house in Oxford.

“Hackney Council proclaims its support for the arts when it suits its own self-image,” organisers said. “But not, it seems, when it cannot exert its own oppressive control.”

Elijah Pierce: the woodcarver who grappled with civil rights and racism

Drone Awards 2020: the world seen from above