Archaeologists have revealed the face of an Egyptian princess who lived almost 4,000 years ago by painstakingly piecing together the wooden shards of her sarcophagus.

The fragments expose the likeness of a royal, possibly Princess Hatshepset, daughter of Pharoah Ameny Qemau, who lived towards the end of Egypt‘s Middle Kingdom.

Her image will be seen for the first time on Channel 4’s Egypt’s Lost Pyramid programme, which follows the two-year excavation and study of the royal’s final resting place.

The pyramid from the 13th dynasty was found in Dahshur’s royal necropolis, 20 miles south of Cairo, in 2017, and was found to have been ransacked by thieves after it was opened.

The coffin had been split open so that the priceless jewels could be ripped from her corpse, before the royal’s bones were scattered across the floor. 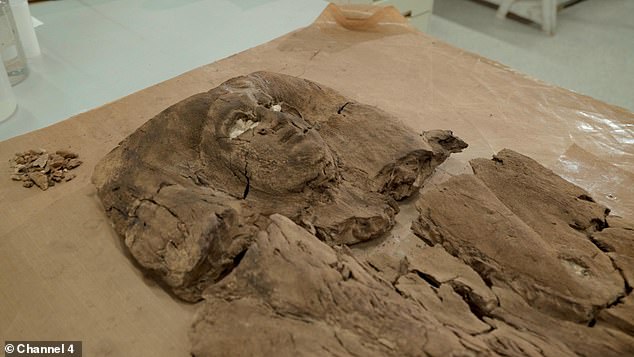 Archaeologists have revealed the face of an Egyptian princess that lived almost 4,000 years ago by painstakingly piecing together the wooden shards of her sarcophagus 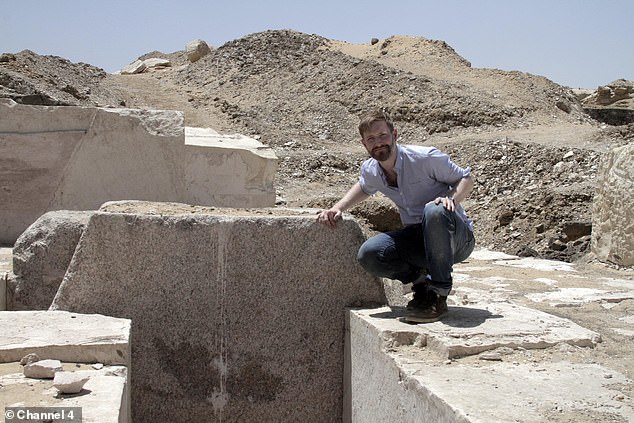 The fragments were found after the tomb, possibly belonging to Princess Hatshepset, daughter of Pharoah Ameny Qemau, was opened in Dahshur, Egypt 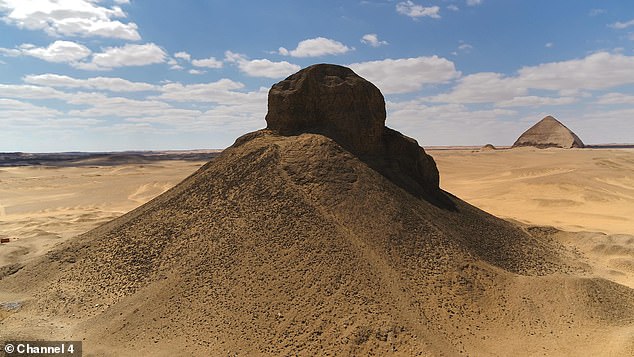 She was buried around a mile from the tomb of her father Ameny Qemau, who is buried in the black pyramid (pictured)

Archaeologists at the American University of Cairo cleaned the pieces before placing them in formation.

It reveals the face of a woman who is wearing a hathor wig, a powerful symbol of fertility, that was very popular during the Middle Kingdom.

‘Coffins normally had features that were similar to the owner but idealised because that’s what they would look like for eternity’, Egyptologist Dr Yasmin El Shazly said.

‘Why would I want to look ugly for eternity?’

When the granite block was first moved in 2017, it revealed a disturbed burial ground which contained shattered bits of wood.

The box containing the canopic jars, which held her liver, lungs, stomach and intestines, also remained. On one side it says ‘daughter of the king’ written in hieroglyphs. 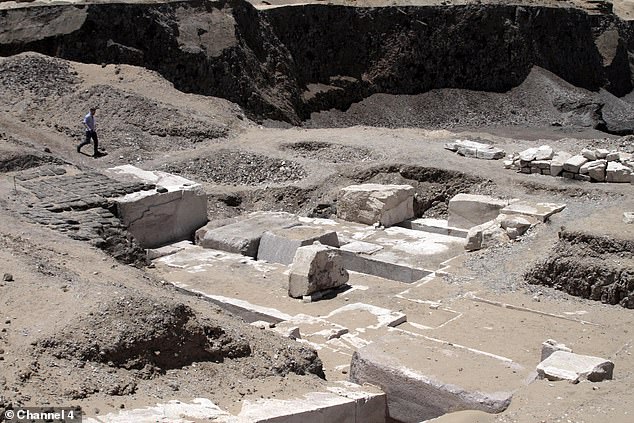 The burial complex, which once had a pyramid above it, was uncovered in 2017. The pyramid eroded away after the precious limestone covering was removed, leaving the mud-stones exposed to the elements 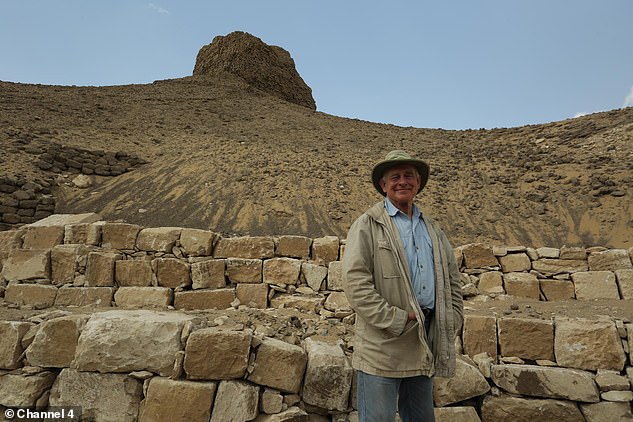 American archaeologist Mark Lehner pictured with the black pyramid. He goes on the first filmed tour inside the structure in Channel 4’s Egypt’s Lost Pyramid programme which airs on Sunday at 8pm

The assertion that this is Princess Hatshepset’s tomb comes from an inscription on the box containing the canopic jars, reports Live Science.

The mystery of two tombs for one Pharoah

When the tomb in Dahshur was first discovered, it was initially attributed to Pharoah Amey Quema due to a symbol on the tomb.

This was bizarre, as his actual tomb had already been found a mile away – leading to suggestions that it was a decoy.

However, when archaeologists opened the tomb they discovered human remains inside, and then a symbol on the box containing the canopic jars saying that the box contained the remains of the ‘pharoah’s daughter’.

This has led to the theory that it is the tomb of Princess Hatshepset.

At the end of the programme Egyptologist Dr Chris Morgan makes the startling claim that the tomb may have been raided before the door was sealed, suggesting that priests may have been involved.

As the period drew to a close, Egypt lost control of Lower Nubia and experienced bouts of famine and political unrest.

While the 13th dynasty, during which Ameny Qemau ruled briefly, was reasonably prosperous, the Second Intermediate Period may have been impoverished, according to archaeologists.

Her tomb is less than a mile from her father’s, according to the programme, which has been nicknamed the ‘black pyramid’.

The structure itself now looks like a pile of rubble, as the precious limestone was removed from the outside, leaving the mud-brick interior exposed to the elements. 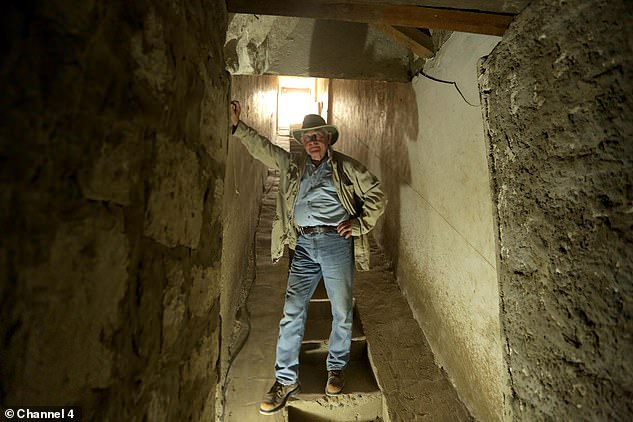 The American archaeologist pictured inside the black pyramid. It contained three chambers, for the Pharoah and his two wives, it was also raided.

Beneath there are winding corridors to confuse raiders along with three separate hidden chambers for the Pharoah and his two queens.

Despite their efforts, these were also raided by tomb robbers. Only the box that held the canopic jars belonging to one of the Queen’s remained, which would have held her stomach, lungs, liver and intestines.

Little is known about the princess due to the robbery of her tomb.

READ  'Contact is limited': inside the world's coronavirus quarantines – video

The box containing the canopic jars is inscribed with the name ‘Hatshepset’, reports Live Science, leading to the assertion that the tomb opened in 2017 belonged to her.

The princess is the daughter of Pharoah Ameny Qemau, who ruled Egypt for two years in the Middle Kingdom, 3,800 years ago.

Towards the end of this period the country went through a turbulent period where control of Lower Numbia was lost and bouts of famine were experienced.

Pharoah Ameny Qemau’s pyramid is the oldest smooth-sided pyramid ever discovered, which led archaeologists to deduce that it may have been the first attempt to build such a structure.

His daughter’s tomb was discovered in Dahshur, a well-preserved necropolis of important figures from ancient Egypt, which is about 25 miles south of Cairo.

After the Giza Pyramid complex and the Valley of Kings, it is probably the most famous of the resting places for the ancient pharaohs.

Its famous for being the site of the 341-foot Red Pyramid – the third largest surviving pyramid in Egypt.

'Rising chance' world will exceed the key 1.5°C global warming limit in the next five years

Councils need detailed data to contain Covid-19. Why have they been sidelined? | Chris Ham and Kate Ardern

Pet CATS were living with nomadic cattle herders more than 1,000 years ago

How many contactable alien civilisations are out there? – podcast

Grizzly bears that live near humans are 7.5 TIMES more likely to die young than those in the wild