MANILA/JEDDAH: Ten years after he was abducted and held hostage by Abu Sayyaf militants, Arab News Asia bureau chief Baker Atyani is again recalling long days of captivity in the jungles of the southern Philippines following news that one of his captors has surrendered to the Philippine military.

Atyani was on duty, reporting for Al-Arabiya News Channel, in June 2012, when Abu Sayyaf Group, a militant outfit operating in Sulu province, kidnapped him for ransom.

He was held captive for 18 months, often in solitary confinement, before managing to escape.

In the years since, some of those who held Atyani hostage have been killed by the military in the southern Philippines and others arrested. This week, one of the most notorious of the group’s members, Ben Quirino, also known as Ben Tattoo, whom Atyani remembers as the strongest ASG fighter, surrendered to the Philippine military.

Formed in 1991, ASG emerged a splinter group of the Moro National Liberation Front, a movement seeking autonomy for Filipino Muslims in the southern Philippines. It was initially influenced by Al-Qaeda, but since the early 2000s has been involved mainly extortion, assassinations and kidnappings for ransom. Some of its factions, including the Sawadjaan group of which Tattoo was a sub-leader, provided support to Daesh operations in Southeast Asia.

Tattoo, 41, has been linked to the murder of several foreigners, including two Canadian tourists who were abducted from the island resort of Samal in 2015 and taken captive to the group’s stronghold in Jolo. He had filmed himself beheading the Canadians in 2016 after a $6.4 million ransom was not paid.

When news of Tattoo’s surrender broke on Friday, Atyani recalled how the militant used to point his machete and M-14 rifle at him.

“He should face justice. He should be punished for what he has done,” the veteran reporter said.

He added: “It feels bittersweet. My mind is flooded with memories of the long days that have been spent in the jungles of Sulu being a hostage in the hands of Abu Sayyaf.”

For more than 500 days, Atyani was kept in a hut, with Tattoo checking on him often.

“He used to be the muscle of the ASG Sawadjaan faction, considered to be one of the best fighters, a front-line fighter and the strongest among them,” Atyani said.

“Ben Tattoo was also known as Ben M-14 because he was always carrying an M-14, with a wooden butt that was carved specifically for him.”

Atyani said that the cruelty Tattoo displayed over the years was part of the militant’s attempts to prove he was a dependable member of the faction that was dominated by the Sawadjaan clan, of which he was not a member.

“He was always trying to prove that he was a good fighter, that the Sawadjaan family could depend on him, and that he could do the impossible,” Atyani said.

But his brutal approach could not sway the leaders of ASG and he was never able to get close.

In the video ASG took as they murdered the Canadian hostages, Tattoo was only militant not covering his face.

“Tattoo always tried to prove that he was someone who could be trusted, and he was trying to be very close to the first circle of the group, but he never got this opportunity and that’s why he was trying to prove himself.”

Atyani believes Tattoo’s attempts to gain a higher rank in the group eventually resulted in him being isolated after the faction’s leader, Hadjan Sawadjaan, was killed by troops in the Patikul area of Jolo, the ASG stronghold, in 2020.

“Sawadjaan’s sons didn’t want Ben to emerge as a leader,” Atyani said. “After the death of Hadjan, he ended up having no shelter or support from the jungle community that is mostly dominated by the Sawadjaan family and ASG chief Radullan Sahiron.”

Abu Sayyaf is the most violent of the Islamic separatist groups operating in the southern Philippines, and claims to promote an independent Islamic state in western Mindanao and the Sulu archipelago. After splitting from the Moro National Liberation Front in the early 1990s, the group launched a campaign of kidnappings for ransom, bombings, assassinations and extortion, and has had ties to Jemaah Islamiyah.

Tattoo surrendered to the military in Patikul following the surrender of his half-brother, Almujer Yadah, who was responsible for ASG’s logistics and food supplies.

“We consider these two as the most notorious ASG leaders to have surrendered considering the number of cases that have been filed against them — from kidnaping for ransom, murder, and many more,” Maj. Gen. Ignatius Patrimonio, commander of the 11th Infantry Division designated to fight militancy in Sulu, told Arab News on Friday.

“They got tired of running from pursuing military forces. Besides, they no longer have the support of the local populace, their group has been badly decimated, and their brothers killed.”

ASG’s strength has been declining since 2018, when the Philippine military stepped up its crackdown on Daesh affiliates. Data from the 11th Infantry Division shows that the number of active militants has decreased from about 300 in 2019 to an estimated 100.

Brig. Gen. Benjamin Batara Jr., commander of the 1103rd Infantry Brigade, which has jurisdiction over Patikul, told Arab News the military has been tracking Tattoo and Yadah since last year.

“Apparently, they were already under pressure because of continuous military and police operations and a series of surrenders of their fellow Abu Sayyaf members,” he said.

The military handed them over to police on Friday and both are facing a series criminal charges.

Atyani believes the weakened state of Abu Sayyaf Group and other militant outfits has led to the surrender of a number of its fighters.

Although the support of the locals may not have wavered much — some still believe in what they call “the cause of the people of Mindanao” — the killing or arrest of a string of militant leaders in the past three years has hastened the extremist groups’ decline.

“There have been no reports of any kidnapping incidents for at least a year or a year-and-a-half, which means they are facing serious financial issues — and without money they can’t survive,” Atyani said. 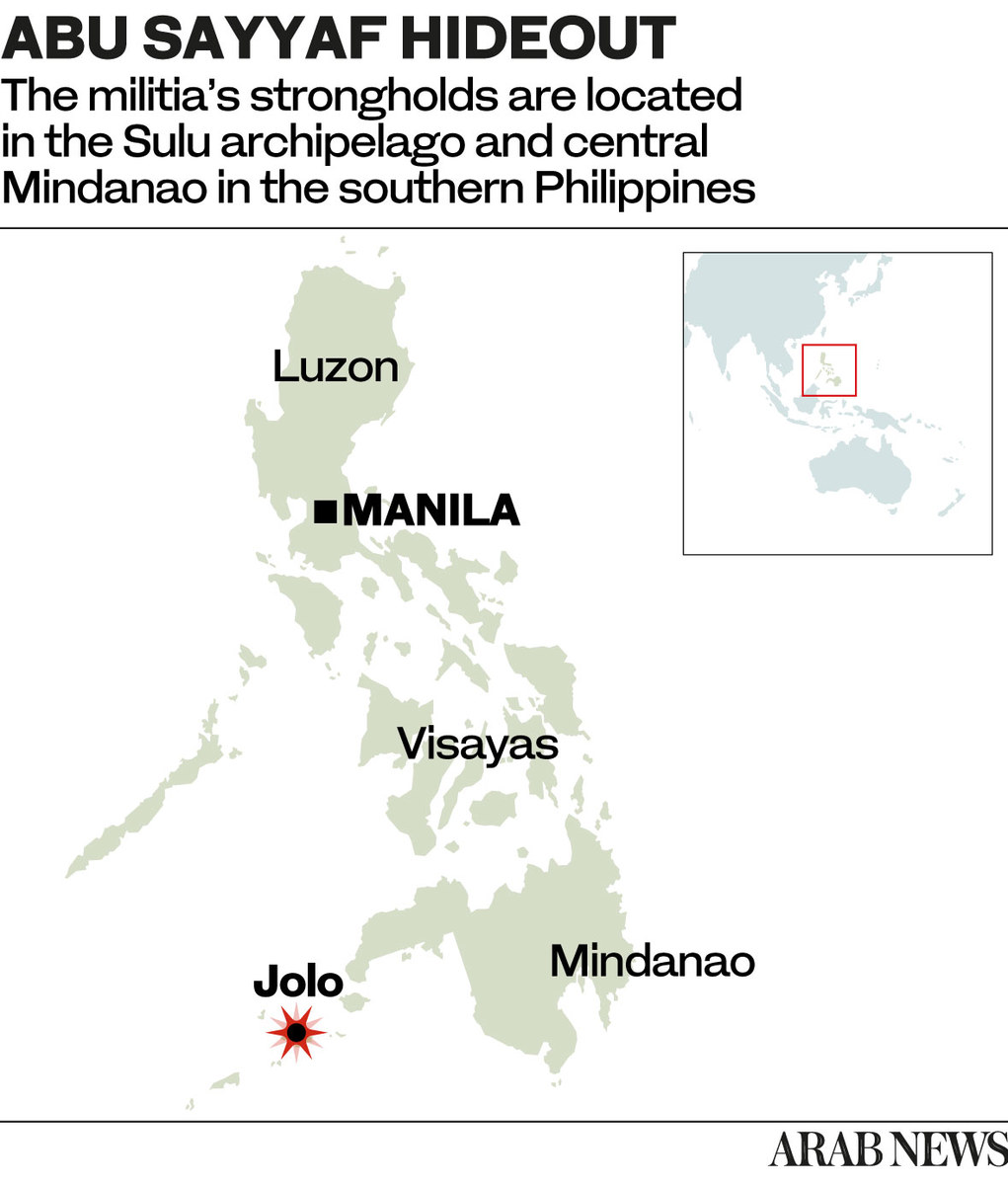 A total of 67 Abu Sayyaf members in Sulu have surrendered to security forces in Jolo so far this year.

Nine years after his escape, Atyani’s emotions are still raw.

“You imagine yourself again in the same situation. That’s why I feel for those who are actually still in the hands of either Abu Sayyaf or other militant groups.”

He recalls his fear of the unknown, saying that it was the reason he kept going, prompting him to make the decision to stay alive and not give in to those he calls “ignorants” — hence his multiple attempts to free himself.

Atyani’s ordeal came to an end on Dec. 3, 2012, when he finally managed to break free to safety.

For almost a decade, news of his captors’ deaths or capture have brought a sense of relief.

“I could see that people who have been unjust to me are actually now facing what they deserve. Either they’ve been killed or arrested, or are now behind bars. This is certainly kind of a relief. But, again, it is a story that never ends. These scars of my kidnapping, I think, will never go.

“So justice is being done and has been done.” 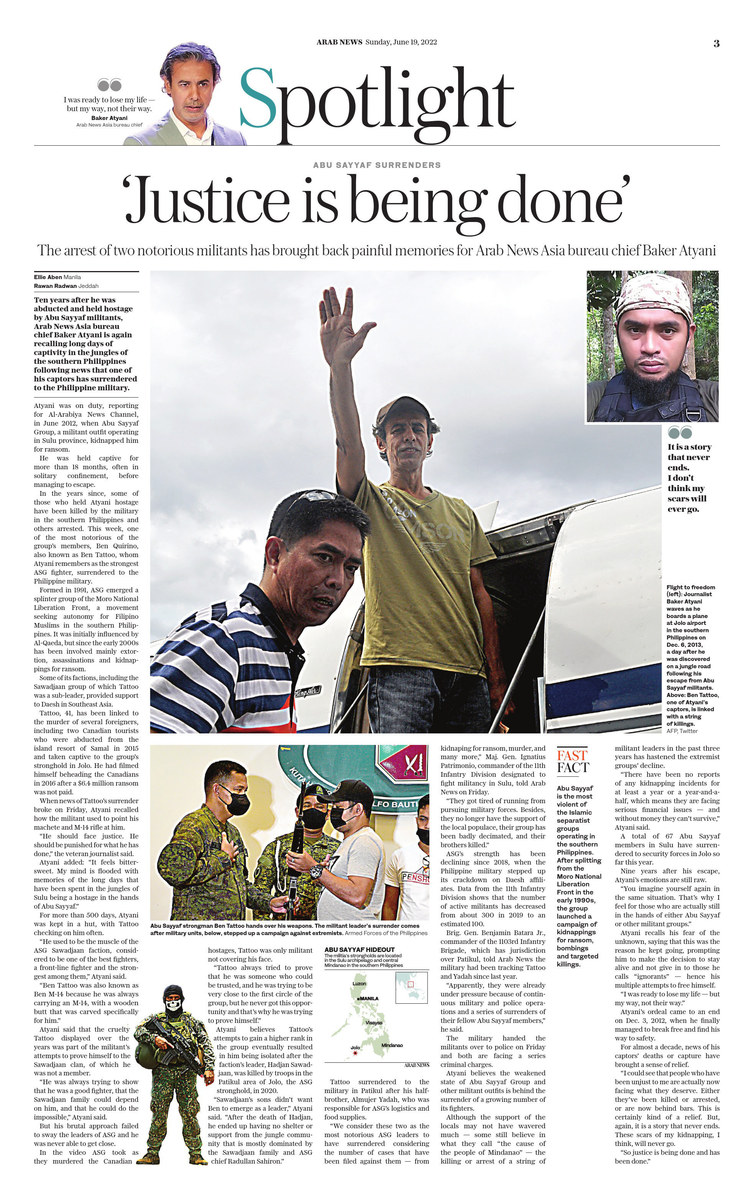