By Keith Griffith For Dailymail.com

Apple shares briefly hit an all-time intraday record high on Tuesday, as the stock continued a December surge that saw it cement its lead over Amazon as the most valuable U.S. company.

Apple stock touched $138.79 in morning trading, before some investors locked in profits and the shares ended the session down 1.3 percent.

Even so, Apple shares are up 13 percent for December and 80 percent so far this year, with just two trading sessions left in 2020. 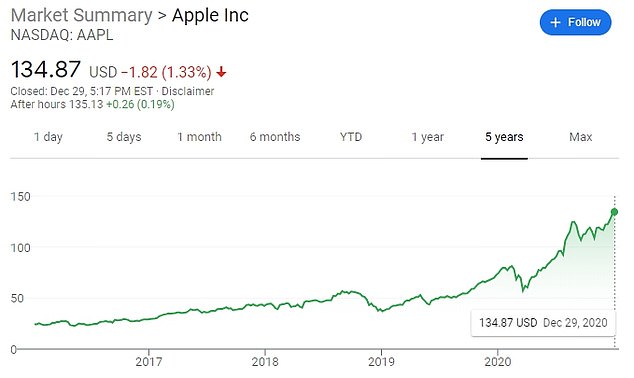 A five-year view of Apple stock is seen above. Shares touched a record high on Tuesday 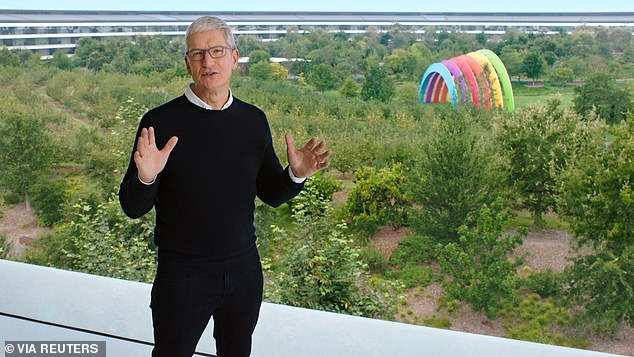 Apple CEO Tim Cook is seen above. Apple shares are up 13 percent for December and 80 percent so far this year, with just two trading sessions left in 2020

Gene Munster, managing partner at Loup Ventures, predicted that Apple would again be the top-performing FAANG stock in 2021. The acronym refers to tech giants Facebook, Google, Apple, Amazon and Google.

‘Our headline prediction is that Apple will be the top-performing FAANG stock in 2021,’ he wrote in a blog post, predicting that the stock would hit $200, a 46 boost from current levels, in the next several years.

Munster predicted that the national rollout of 5G cellular technology would spur a boom in Apple customers upgrading their iPhones.

‘Specifically, Apple should enjoy its biggest smartphone upgrade cycle since iPhone 6, when iPhone unit growth went from 13% in FY14 to 37% in FY15,’ he wrote.

As well, Apple shares have risen on reports that the company has revived its secret program to build a self-driving electric car.

Central to the company’s strategy is a new battery design that could ‘radically’ reduce the cost of batteries and increase the vehicle’s range, Reuters reported. 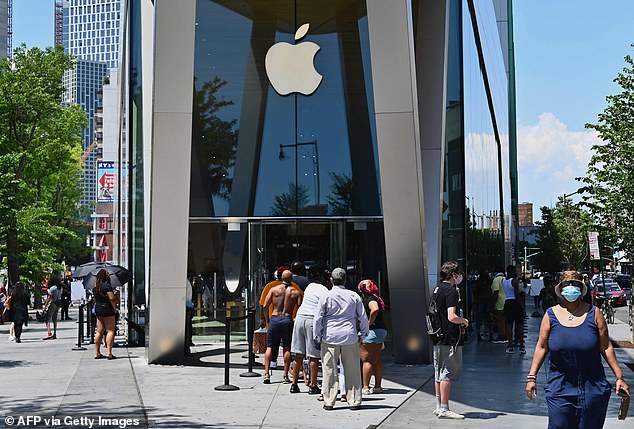 People wait in line outside an Apple store on June 22, 2020 in the Brooklyn Borough of New York City. One analyst predicts 5G will spur a boom in iPhone upgrades

‘If Apple has achieved a battery breakthrough, this could serve as a driver to finally move forward with production given battery costs are one of the main obstacles to mass adoption of EVs,’ Evercore analyst Amit Daryanani wrote.

Some analysts have expressed skepticism about the 2024 launch date for an Apple car as cited by Reuters, saying that 2028 is a more realistic timeline.

Still, the prospect of Apple tapping into the massive transportation segment has tantalized investors.

‘Whether Apple Car materializes in a fully-branded vehicle or the company pursues licensing software and technology to existing automakers, capturing just a slice of this market would translate to a material impact on Apple’s revenue,’ wrote Munster.

Apple has also benefited from the work-from-home trend in the pandemic, with Mac and iPad sales surging in recent quarters after years of sluggish growth.