Apple has been granted a patent on a customizable keyboard that would let users quickly swap English letters for a new alphabet.

The patent, officially titled ‘Electronic devices having keys with coherent fiber bundles,’ also explains how the keyboard could be modified for gaming, where each key would ‘correspond to particular in-game actions.’

It could also reconfigure keys to address accessibility issues or specific work habits.

The tech giant submitted the theoretical accessory in just under the wire: The keyboard got the green light on December 29, the last day of 2020 to receive approval from the U.S. Patent and Trademark Office. 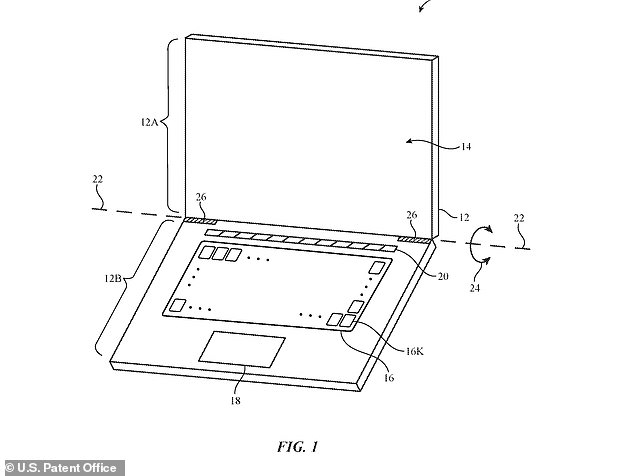 Apple has been granted a patent for a ‘reconfigurable’ keyboard, with each key having a digital readout showing you its current function. The technology could be used to quickly turn English letters into another alphabet — Cyrillic or Hebrew, for example

The filing, originally reported on by Patently Apple, includes a description about how the keyboard’s keys could have ‘an associated key display’ connected to ‘control circuitry in the keyboard’ via a ‘coherent fiber bundle.’

According to the patent, each key would be ‘formed from a fiber optic plate’ with ‘opposing first and second surfaces.’

Each key would operate as an adjustable digital display, and could be made from materials such as glass, ceramic, metal, polymer, or even crystalline materials like sapphire.

The technology could be used to quickly turn English letters into another alphabet—Cyrillic or Hebrew, for example. 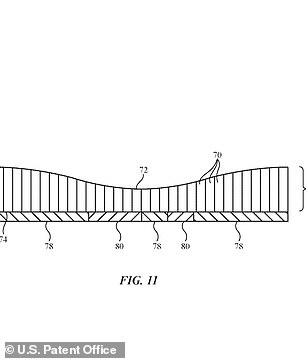 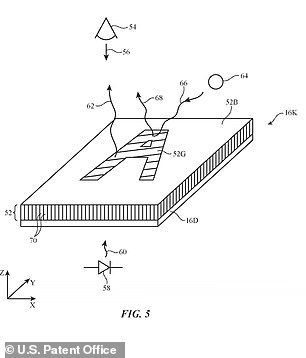 Each key would operate as an adjustable digital display, and could be made from glass, ceramic, metal, polymer, or even crystalline materials like sapphire

It would also be a boon for gamers, ‘temporarily convert[ing] a standard keyboard into a gaming keyboard in which keys correspond to particular in-game actions.’

Since users would need to know what the keys on their keyboard represent, Apple suggests ‘it may also be desirable to provide a user with visual feedback indicating the current status of each key (e.g., whether the key corresponds to an alphanumeric character or to a gaming function, etc.).’

‘This can be accomplished by providing keys in a keyboard with dynamic labels,’ the filing explains. ‘The dynamic labels may be generated using dynamically reconfigurable label displaying components such as organic light-emitting diode displays with arrays of pixels, electrophoretic displays with arrays of pixels, or other pixel arrays (as examples).’

Drawings submitted with the application indicate the reconfigurable keyboard could be integrated into a Macbook laptop or used as a standalone keyboard with a desktop computer. 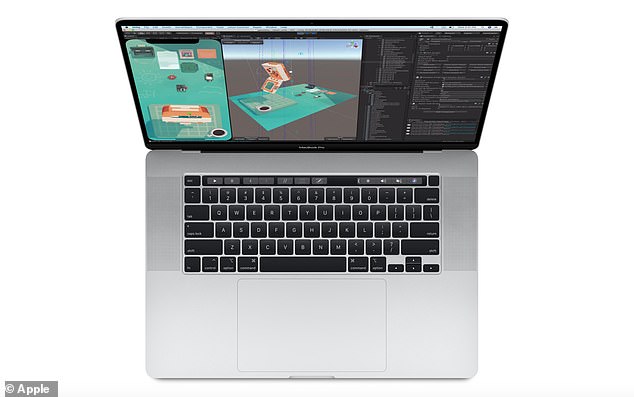 According to the filing, the proposed technology could also temporarily convert a standard keyboard into a gaming keyboard, ‘in which keys correspond to particular in-game actions’

The technology is a natural successor to the Touch Bar, a touchscreen located above the number keys introduce on MacBook Pro keyboards in 2016.

The bar is intended to let users swipe instead of press traditional function keys but it can be adapted to perform many more tasks.

Apple files hundreds of patents every year, and most are never developed into commercial products.

One filing from May postulated an experimental design for a bendable laptop made from a single piece of material.

This theoretical MacBook would smoothly bend like a stack of papers rather than use the rigid mechanical hinge design of most existing laptops.

In November, Apple was granted a patent to add Force Touch capability to the MacBook’s Touch Bar, allowing the keyboard to perform different functions depending on how hard a user pressed on the bar.

It also won a patent for an external keyboard that could be attached magnetically.

AI ethicist Kate Darling: ‘Robots can be our partners’

Wilhelm Reich: the strange, prescient sexologist who sought to set us free

Pandemic made 2020 ‘the year of the quiet ocean’, say scientists