There have been plenty of rumours over the years detailing VR headsets, AR headsets and AR glasses, so what exactly has Apple got planned for its augmented reality future? The bevvy of rumours, leaks, acquisitions and new hires at Apple suggest that it could be a combination of all three, possibly due for release over a number of years.

Apple’s AR/VR development team is reportedly comprised of over 1000 Apple employees, all dedicated to work the emerging technologies into upcoming products. This is backed up by specific AR/VR-inspired Apple hires over recent years, and the company has also acquired a handful of companies that specialise in either AR/VR tech, or content tailored to those platforms.

It makes sense in a way – Apple has always said that AR is a very interesting technology, and it effectively already has the largest AR app offering in the world via ARKit-integrated apps on the App Store, so it wouldn’t be a huge step to transfer AR-focused apps to a headset platform that’d provide a more immersive, enjoyable experience than holding up a smartphone in front of you.

The company reportedly has multiple headset prototypes on the go, focused not only on augmented reality but virtual reality too.

The end game for Apple is expected to be a fully-fledged pair of augmented reality glasses, tentatively dubbed Apple Glass by leaker Jon Prosser, but the tech could still be in its infancy and still a few years away from release. We cover the latest Apple AR Glasses news separately for those interested in the upcoming smart glasses.

The solution, according to Bloomberg and The Information, could be an AR/VR hybrid headset similar to the Oculus Quest 2, due for release in the not-so-far future. Here’s all you need to know about Apple’s foray into the world of AR/VR headsets, including the latest leaks and a possible release window.

What to expect from Apple’s AR/VR headset

Apple’s first dedicated headset will focus not only on augmented reality but virtual reality too, with a plethora of new details available courtesy of an early 2021 Bloomberg report.

The details seem to have come from an Apple insider following an internal employee meeting in 2020 where execs detailed exciting new features expected to ship with the headset, including 3D scanning and advanced human detection, to aid augmented and virtual performance.

In terms of general design, the headset is said to look similar to that of the Facebook-owned Oculus Quest 2, albeit with a sleeker design (it’s an Apple product, after all) and lightweight fabrics and materials that help maintain a comfortable fit over longer sessions.

However, despite Apple’s approach to fanless technology – even at the cost of performance, like with the MacBook Air M1 – the report suggests Apple may include a fan to keep the headset cool.

While Apple has looked into using its virtual assistant, Siri, to control the headset, the company is also looking into the possibility of bundling a physical remote. Though Bloomberg couldn’t provide details on the remote, the MacRumours discovery of a photo from iOS 14 depicting a controller similar to that used with the Vive Focus could give us a rough idea of what’s expected.

It could also tie in to the Remote app on your iPhone, allowing you to control the headset the same way you would an Apple TV, although that’s just an educated guess from us at Tech Advisor right now. 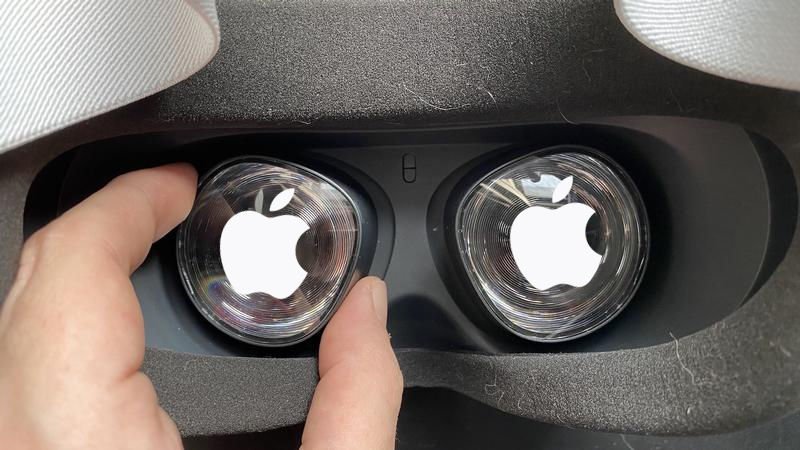 The headset allegedly features an Apple-designed chip that’s more powerful than the Mac-focused M1 chipset, allowing the company to include a high-resolution display and cameras that allow users to “read small type” and allow the user to “see other people standing in front of and behind virtual objects” according to the reports.

It’ll also be able to map surfaces, edges and environments with “greater accuracy than existing devices on the market” to provide great 1:1 tracking in virtual and augmented reality environments. The built-in cameras could also track hand movements, and even project a virtual keyboard onto physical surfaces for typing.

While the tech – especially the ability to see people standing in front of virtual objects in a real environment – sound more tailored to augmented reality, Bloomberg suggests that the main focus will instead be virtual reality, with the AR capabilities being “more limited” after allegedly hitting several development hurdles.

Apple allegedly wants to create a dedicated App Store for the headset, putting a particular spotlight on gaming, streaming video content and virtual communication – much like Oculus’ latest standalone headset. According to Bloomberg, the headset will offer “an all-encompassing 3-D digital environment” focused on gaming, streaming content and catching up with friends (or possibly work colleagues, depending on your setup).

Other rumours suggest that Apple could be working with Valve on its upcoming headset. Valve shipped its own high-end VR headset, the Valve Index, back in April 2019 and it’s still regularly out of stock, showcasing just how well Valve knows its VR-focused audience.

It’s not the first time it has happened either – Valve worked with Apple to bring VR support to macOS Sierra via eGPU support and macOS support for SteamVR software – so it’s entirely possible that the two companies could work together on Apple’s upcoming headset.

However, with a predicted 2020 release in the same report, we’re not too sure how accurate the DigiTimes report is, so take that one with a pinch of salt.

When it comes to Apple’s initial AR/VR headset, Bloomberg suggests that the headset will be a “pricey, niche” option, and that Apple allegedly expects to only sell 180,000 units (along the lines of the Mac Pro) when it’s released in 2022 – a release window backed up by a separate report from The Information.

It’s worth pointing out that Bloomberg notes that it’s still very much a late prototype at this stage, so the plans could change or the project could be scrapped entirely.

That’s a little later than some believe – namely Ming-chi Kuo, a notable analyst with a great track record for Apple product predictions. In a January 2021 memo sent to investors, Kuo claimed that Apple is working on an AR device to be released this year, although he didn’t detail what the device could be. With AR-focused LiDAR built into the iPhone and iPad Pro, it could simply be the sensor coming to another device – possibly the next-gen iPad Air.

The Bloomberg report also suggests that if it does make it to market, it’s expected to be much more expensive than existing standalone VR headsets, which currently range from the £299/$299 Oculus Quest 2 to the enterprise-focused £905/$799 HTC Vive Focus Plus, although the publication didn’t suggest a specific price. It’s likely too early in development for such a number to be calculated, but expect it to be closer to HTC than Oculus.