THE Ekiti State chapter of the Peoples Democratic Party and the governing All Progressives Congress on Tuesday disagreed over the performance of the Governor Kayode Fayemi-led administration over the last three years.

While the PDP described the governor’s time in office as “a disaster and colossal failure in the history of the state”, the APC, insisted that the governor gave a good account of himself.

He stated, “It is shameful the state government invited the Vice President, Prof Yemi Osinbajo to inaugurate only a project executed by the administration in three years, which is the Civic Centre in Ado Ekiti, which started seven years ago.

“Regretfully, the Vice President and his entourage landed in Akure, a 30-minute drive from Ado Ekiti and was picked in a chopper at the Akure airport to Ado Ekiti because of the  terrible, deplorable and precarious condition of the Akure/Iju/Ikere Road just as other roads leading to the state have all collapsed.

He said this was not the case when the PDP was in government, “During the PDP administration of Governor Ayodele Fayose, the roads were constantly maintained with Ekiti State money which was never refunded by the APC Federal Government.”

The PDP also accused the APC-led administration of embarking on a looting spree instead of working for the common good of the people.

Reacting to the charge, the APC State Publicity Secretary, Segun Dipe, said, “How can anyone say paying workers’ salaries for three years without owing isn’t worth celebrating?

“Does the completion of the Civic Centre, which the former Governor Ayodele Fayose abandoned despite reaching 80 per cent completion and tarring of so many roads not worth celebrating?

“Under the PDP government, primary and secondary schools’ students were paying levies, but is the abrogation of such obnoxious levies by Governor Fayemi not worth celebrating? 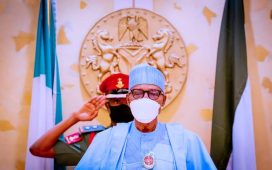