The gunmen were said to be dressed in combat military fatigue. She was abducted in Rumuokrushi.

In view of the development, the National President of the Nigerian Bar Association, NBA, Olumide Akpata has petitioned Governor Nyesom Wike and the Attorney General of Rivers State, Prof. Zacheus Adango to intervene and ensure the immediate release of Ajayi.

Akpata confirmed contacting Governor Wike and the Attorney General and Commissioner for Justice while announcing a Taskforce set up by the body to liaise with the State Government and relevant authorities to ensure the release of the female lawyer.

Family of Ajayi also called for her immediate release.

The family made the call through an online social media posts, saying that the Port Harcourt based lawyer, had reportedly been abducted by unknown gunmen at her residence at Rumuokwurusi.

The concerned friends and family members on Monday morning said the hoodlums trailed her to her house and whisked her away forcefully on Sunday night.

The hoodlums said to be at least four in number and dressed in combat apparels and dark t-shirts reportedly picked her in front of her home as she was waiting for her gate to be opened.

In a video that is now circulating on Twitter, the victim’s sister was seen crying while calling on people to come to their aid and help rescue her sister.

In the video, she said the uniform men trailed her to her home and that as she was about to drive in through the gate, she was forcefully whisked away.

She said her mother, who is said to also be a lawyer tried to stop them but was given a slap and that the gunmen shot in the air.

The kidnapped lawyer is said to be studying for her Master’s degree at the Rivers State University, Port Harcourt.

Her whereabouts remain unknown as at the time of filing this report.

The Rivers Police Command headquarters had not reacted to the kidnap. 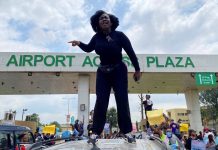