ABUJA — Chief Justice of Nigeria, CJN, Justice Walter Onnoghen, yesterday, asked Justices of the Supreme Court and judicial officers across the federation to resist attempts by those he described as “rapacious elite” to make justice a commercial commodity.

The CJN further maintained that it would be impossible to stage a successful anti-corruption war in the country without a corresponding fight against the culture of impunity.

Onnoghen, who also reavealed how lawyers forged court judgements to secure SAN rank, said:  “If we allow and respect the rule of law, then there will be a dramatic reduction in corruption and injustice.”

He spoke at a special court session the Supreme Court held to mark the commencement of its 2018/2019 legal year, as well as the swearing-in of 30 new Senior Advocates of Nigeria, SANs.

He said: “Corruption or any other form of injustice, for that matter, thrives in a culture of impunity. To carry out a successful campaign against corruption, we have to fight the culture of impunity, which is an attitudinal phenomenon.

“If we allow and respect the rule of law, then there will be a dramatic reduction in corruption and injustice. Corruption starts with a decision by an individual or a group of individuals to do the wrong thing. It is as simple as that. Corruption is never an accidental act. The person who commits a corrupt act has an option to do the right thing.

“Corruption in the judicial arm of government happens if an arbiter, in this case a magistrate, a judge, a justice or a panel, having heard from all parties and having determined where justice lies, decides to do the wrong thing by giving judgment to favour a particular individual or party over another.”

While decrying the impact of corruption in the justice sector, the CJN disclosed that some applicants that applied to be elevated to the SAN rank were found to have engaged in dishonourable conduct, such as forgery of judgments, resulting in their being reported to the Police for investigation and possible prosecution.

He said the National Judicial Council, NJC, was determined to redress proven cases of judicial corruption with swift and decisive measures, adding that the Anti Corruption Cases Trial Monitoring Committee, COTRIMCO, had at the end of the last legal year, identified a total of 1,499 pending graft cases.

He said: “Of this number, a total of 345 judgments were delivered, 14 cases reserved for judgment and 12 cases struck out.”

Why Buhari signed 4th Alteration to the 1999 Constitution—AGF

In his address at the event, Attorney-General of the Federation and Minister of Justice, Mr. Abubakar Malami, SAN, said President Muhammadu Buhari had in his bid to enhance the independence of the judicial and legislative arms of government to enable them play their constitutional roles in a more robust manner, assented to the 4th Alteration to the 1999 Constitution.

He said section 121 of the constitution was amended to provide that monies due to the judiciary in the annual budget should henceforth be paid directly to the heads of the courts and that of the legislature also paid to the heads thereof.

READ  Whole world in her hands

Malami, whose address was read by the Solicitor-General of the Federation, Mr. Dayo Apata, said: “This alteration, without doubt, finally answers to the need to have more independent and impartial courts at federal and state levels and will certainly advance the cause of the Rule of Law in the country.

Meanwhile, the 30 new SANs called for the decentralisation of the Supreme Court to reduce the backlog of cases pending for years at the apex court.

Chief Oba Maduabuchi, who read the address on behalf of the new SANs, said: “This single Supreme Court can no longer withstand the avalanche of judgements that come from these various cadres of court.

‘’The realities and dynamics of the present day judicature makes it imperative that the Supreme Court must break into divisions. It is suggested that we begin by having three Divisions – one in Enugu, one in Ibadan and another either in Abuja or Kaduna.”

Though 31 applicants were earlier okayed for the SAN rank, Legal Practitioners’ Privileges Committee, LPPC, after its emergency meeting on September 20, dropped one of the nominees, following his alleged involvement in acts of judicial misconduct.

Man Given Death Sentence After Defiling 2-Year-Old To Death 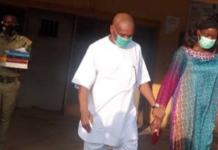