Joshua and Whyte have a long-standing rivalry that dates back to the world heavyweight champion’s third amateur fight, and they each hold a win over the other 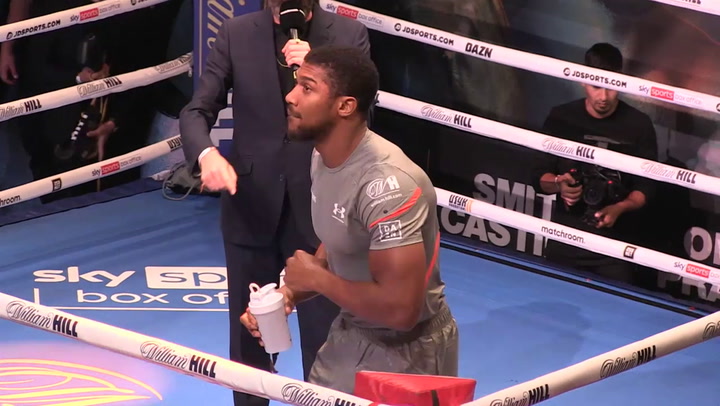 Anthony Joshua works out ahead of Oleksandr Usyk fight

Anthony Joshua has vowed to once again fight Dillian Whyte before he’s finished boxing with the pair currently 1-1 against each other.

Joshua’s first ever boxing loss, just three fights into his amateur career, came against Whyte, and he avenged that defeat in the pros to hand his rival his first loss in 2015.

However, the feud has never been truly settled, and Joshua believes that before his career is finished, he will have fought Whyte one more time.

Asked by Gary Neville during an episode of his show The Overlap, Joshua said that he wishes he could relive their initial amateur meeting, saying he wanted to “punch him up”.

Anthony Joshua and Dillian Whyte fought in 2015, with AJ coming out on top
(

“Maybe the day I lost to Dillian, so I can punch him up,” Joshua said when asked which day he would relive. “This was my third fight, so I can go back and punch him up.”

And he seemed to think that the opportunity would arise again, adding: “But I’ll do that still, at some time in the future anyway”.

Whyte has also pushed for that rematch throughout his career, although his path has taken him towards the WBC belt, which is the only heavyweight strap that doesn’t belong to Joshua.

It was held for a number of years by American Deontay Wilder, before being taken by Tyson Fury in February last year, leading to further delays in Whyte getting his title shot.

And Whyte has since indicated that he would rather face Joshua again, saying that his next opponent Oleksandr Usyk is not a real heavyweight contender due to his size and lack of experience at the weight.

“These guys know,” Whyte told Sky Sports in May. “You can say what you want about me, but there are two things that they cannot deny.

“I always come to fight and anyone that fights me, you will know that you’ve been in a fight, regardless, win, lose or draw.

“The two fights I lost, the guys took major damage.

“Anthony Joshua almost got knocked out when I fought him. If you watch the clips back you hear him saying, ‘If I took one more body shot from him, I would have folded in half’.

“These guys know regardless, win, lose or draw. I come to give work.”

Would you watch a rematch between Dillian Whyte and Anthony Joshua? Let us know in the comments section!

Joshua won’t be concerning himself too much with Whyte, or any other heavyweights, until after this weekend, when he faces Usyk for his unified heavyweight titles.

He has put together a very rigid training plan for the legendary former cruiserweight champion, that has included one-handed sparring sessions and goes all the way down to having a special ring walk song written.

Usyk has yet to prove himself at heavyweight, but is a former undisputed champion the weight below and has never lost in his career.

He is also a decorated amateur, winning gold at the same London 2012 Olympics where Joshua made his name almost a decade ago.