THREE more coronavirus patients have tested positive for the killer bug in Britain today – bringing the total number infected to 19.

In just 24 hours six new cases have been confirmed, heightening fears the country could soon be gripped by a spiralling epidemic.

A Welsh resident, thought to be from Swansea, has the deadly virus after returning from northern Italy, with two more patients infected in London after travelling from Iran – which has seen the highest number of deaths outside of China.

Medics are now scrambling to find anyone the trio came into contact with to stop the killer bug spreading further.

The British Army is reportedly on standby to step in as the epidemic looms – with barracks bookmarked as potential quarantine zones.

The London patients are being treated at the Royal Free Hospital in London, where a number of infected people are also in quarantine.

Dr Giri Shankar, incident director for the Covid-19 outbreak response at Public Health Wales, said: “Public Health Wales is working hard to identify close contacts, and we are taking all appropriate actions to reduce any risk to the public’s health.”

Officials have not revealed their age, gender or where exactly they were diagnosed.

The epidemic has so far infected 19 people in the UK and killed nearly 3,000 globally.

READ  Frontline NHS staff 'are having to share the SAME facemasks'

Former Health Secretary Jeremy Hunt has warned we are at a “tipping point” – with ministers considering cancelling major events and closing schools for at least two months.

Mr Hunt, who now chairs the powerful Commons’ Health Select Committee, said stopping the bug spreading to more than five per cent of Brits would save “hundreds of thousands of lives”.

Speaking on the BBC Today programme, he said: “Even a system as well prepared as the NHS is not going to be able to operate at business as usual, if there’s a pandemic.

“Given that we are now at that tipping point, I think the government are rightly starting to explain in more detail what some of those trade-offs might be.”

A “drive-through” virus testing service is set to be launched in London to cope with increasing numbers of people showing symptoms.

Brits have been told they can protect themselves against the virus by simply regularly washing their hands.

But as the panic rises over the rapidly spreading bug, people are rushing to buy household items and set up “isolation” rooms, in case they need to stay at home.

Welsh Chief Medical Officer, Dr Frank Atherton, said: “I can confirm that one patient in Wales has tested positive for coronavirus (COVID-19).

“All appropriate measures to provide care for the individual and to reduce the risk of transmission to others are being taken.

“I can also confirm that the patient had travelled back to Wales from Northern Italy, where the virus was contracted.”

Brits are facing months of coronavirus chaos with sporting events, gigs and schools on lockdown to stop the spread of the killer bug.

Professor Whitty has said the UK will have to consider axing mass gatherings if the “virus intensifies”.

An emergency shutdown could mean this summer’s Euros tournament, Premier League games, the FA Cup Final, Grand National and Glastonbury are all under threat.

Even the famous April London Marathon could be called off as organisers say said they are “monitoring” the situation.

Professor Whitty yesterday warned it is “just a matter of time” before the UK is gripped by the epidemic.

He said: “One of the things that’s really clear with this virus, much more so than flu, is that anything we do we’re going to have to do for quite a long period of time, probably more than two months.”

He warned there would be a huge ‘social’ cost if the virus continues to intensify and spread further throughout the country.

The three who tested positive for the deadly infection yesterday had returned from locked-down northern Italy and Tenerife, where 168 Brits are being quarantined in a hotel.

Italy has now become the worst affected country in Europe with at least 650 cases and 15 deaths. There is now more than 82,000 cases worldwide.

So far in the UK, more than 7,690 people have been tested for the virus and of the 19 to have tested positive, eight have so far been discharged from hospital.

In China, where the virus originated, 78,497 cases have been reported, including 2,744 deaths.

World Health Organisation (WHO) director-general Dr Tedros Ghebreyesus told a press conference in Geneva on Thursday that coronavirus has the potential to become a global pandemic.

Public health advice remains to wash hands with soap, not rub the face and maintain a distance from people who are coughing and sneezing, he said. 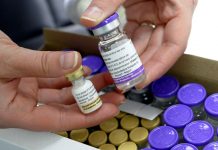