Andy McDonald, one of the last left-wingers in the shadow cabinet, has resigned from the Shadow Cabinet 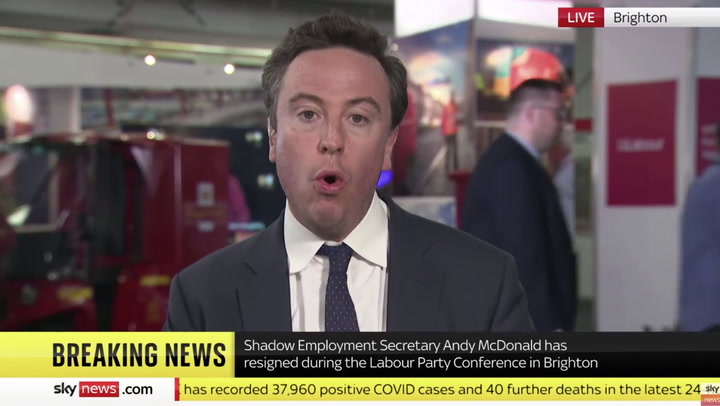 Shadow Cabinet member Andy McDonald has dramatically quit his post in the middle of Labour conference.

The Shadow Employment Rights Secretary, who was one of the few survivors from Jeremy Corbyn’s era, resigned today in a row over the National Minimum Wage.

Mr McDonald said he was quitting because he had been told to argue against a £15 National Minimum Wage and against Statutory Sick Pay at the living wage by Keir Starmer’s office.

“This is something I could not do,” he said.

Mr Starmer thanked him for his service and said Labour was focused on winning the next general election “so we can deliver for working people who need a Labour government”.

His resignation will come as a blow to Mr Starmer, who was in buoyant spirits after getting controversial internal rule changes over the line.

Former Labour MP Louise Ellman, who quit the party over anti-Semitism concerns under Jeremy Corbyn’s leadership, said she was rejoining the party on Monday – in a boost to Mr Starmer’s efforts to stamp out anti-Semitism.

Mr Starmer has been under pressure to make a success of his first in-person conference as Labour leader.

The start of conference has already been overshadowed by the explosive row over party rules and criticism of his deputy Angela Rayner who branded the Tories “scum”.

Mr McDonald accused the Labour leader of not honouring his pledges to the membership and said the party was more divided than ever in a strongly-worded resignation letter.

In the letter, addressed to Mr Starmer, he said: “It is with deep sadness that I am tendering my resignation from the Shadow Cabinet. My role as Shadow Secretary of State for Employment Rights and Protections has become untenable.

“When you became leader, I accepted the role because I wanted to fight for the working people of this country.

“It has become clear to me that I cannot do this as a member of the Shadow Cabinet.

“Yesterday, your office instructed me to go into a meeting to argue against a National Minimum Wage of £15 an hour and against Statutory Sick Pay at the living wage. This is something I could not do.

“After many months of a pandemic when we made commitments to stand by key workers, I cannot now look those same workers in the eye and tell them they are not worth a wage that is enough to live on, or that they don’t deserve security when they are ill.

“We live in a time when the people of this country have a renewed awareness of how important the work done by millions of low-paid workers truly is.

“To have the Labour Party, the party of working people, fail to realise that is a bitter blow.”

The Middlesbrough MP added: “I joined your frontbench team on the basis of the pledges that you made in the leadership campaign to bring about unity within the party and maintain our commitment to socialist policies.

“After 18 months of your leadership, our movement is more divided than ever and the pledges that you made to the membership are not being honoured. This is just the latest of many.”

Mr Starmer said: “I want to thank Andy for his service in the Shadow Cabinet.

“Labour’s comprehensive New Deal for Working People shows the scale of our ambition and where our priorities lie.

“My focus and that of the whole party is on winning the next general election so we can deliver for working people who need a Labour government.”

Mr McDonald was first elected to Parliament in 2012 and became a Shadow Minister under Mr Corbyn in 2016.

He was made Shadow Transport Secretary that summer, a post he held until April 2020 when Keir Starmer gave him a newly created role.

“He has resigned on a point of principle that workers should have decent pay,” he said.

Ex-Unite boss Len McCluskey said it was a blow to see the departure of the “last Corbynite in the shadow cabinet”.

He told TimesRadio: “It’s sad because Andy… well in essence he’s the last Corbynite in the shadow cabinet. And it’s a terrible shame.

“He’s a really decent man, he’s worked very very hard with all the trade unions on employment issues and his letter of resignation is quite stinging.

But Shadow Attorney General Charlie Falconer told the Mirror: “‘It’s surprising earlier today Rachel had such a great reception, and at 5pm Andy chose to resign.

“We really shouldn’t be focusing on this at a time when the party needs to be making a lot of choices.

“It’s a shame as he was good in his role. We need to keep looking forward.”

“If we are to take his argument at face value, it appears he’s resigned on the basis of a policy he agreed and announced at the weekend.” 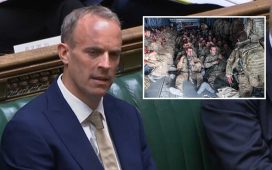