Some textile-related work tasks were only carried out by women during the Bronze Age (1900-1600 BC) in southern Spain, a new study of dental records shows.

Researchers analysed fossilised teeth of 106 individuals buried in Granada, southern Spain, who were part of the ancient ‘Argaric’ culture 4,000 years ago.

Women workers used their front teeth – incisors and canines – to perform tasks that involved biting into threads and cords, they found.

The specific dental wear features, including notches, flakes and grooves on the enamel, resulted from the manipulation of plant and animal fibres used to produce textiles and baskets. 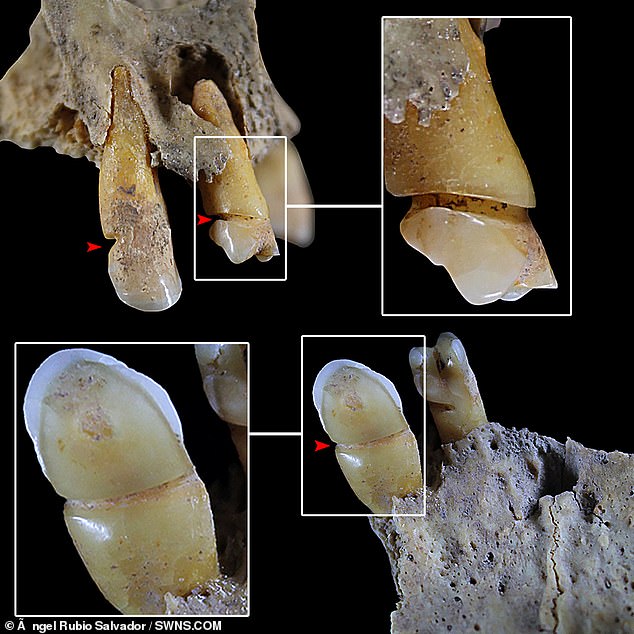 Scientists say that dental remains (pictured) from the Argaric culture, who lived in southern Spain 4,000 years ago, prove certain jobs were reserved exclusively for women, such as the production of hand-crafted threads and textiles

While the talents of the Argaric culture have previously been documented, a link between these activities and the gender of the creators of these textiles has not been established until now.

‘One of the most important conclusions of this new study is that double labour specialisation existed already by the end of the Bronze Age,’ said study author Dr Marina Lozano at the Institut Català de Paleoecologia Humana i Evolució Social (IPHES) in Tarragona, Spain.

‘It indicates that a single, small group of people was dedicating themselves to handcrafts related to the production of threads and textile manufacture and that, furthermore, these activities were carried out exclusively by women.’

The Argaric culture, named after the site El Argar near the town of Antas, developed in the southeastern part of the Iberian Peninsula – the landmass of modern day Spain and Portugal – during the Early Bronze Age between 2,200 and 1,550 BC. 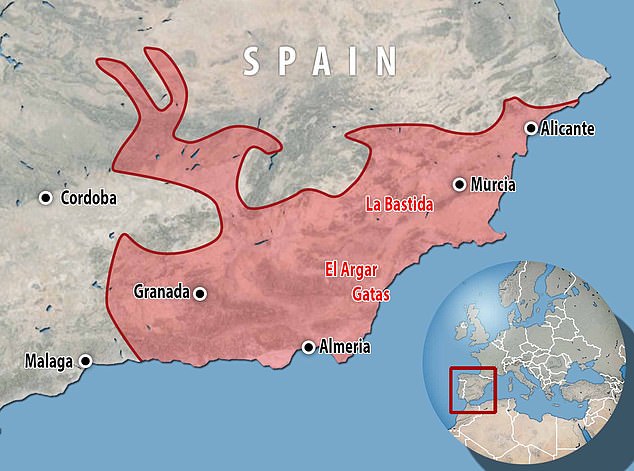 The analyses of teeth from the Castellón Alto individuals belonging to El Argar culture (Southeastern Iberia), dated from Bronze Age, highlighted in red. El Argar culture was a complex society, with social differentiation based on gender, age and specialisation in the manufacture of craftwork made from ceramics, lithics, textiles and metals

It was a complex society, with social differentiation based on gender, age and specialisation in the manufacture of craftwork made from ceramics, textiles and metals.

Early settlers quickly learnt how to forge weapons out of bronze, giving them an advantage over neighbouring tribes.

For this study, the dental remains of 106 Argaric individuals buried in the Castellón Alto site in Granada, Spain, were analysed – 46 of whom were men and 39 women.

‘The others were either children or adults where we were unable identify their sex because they were badly preserved,’ said Dr Lozano. 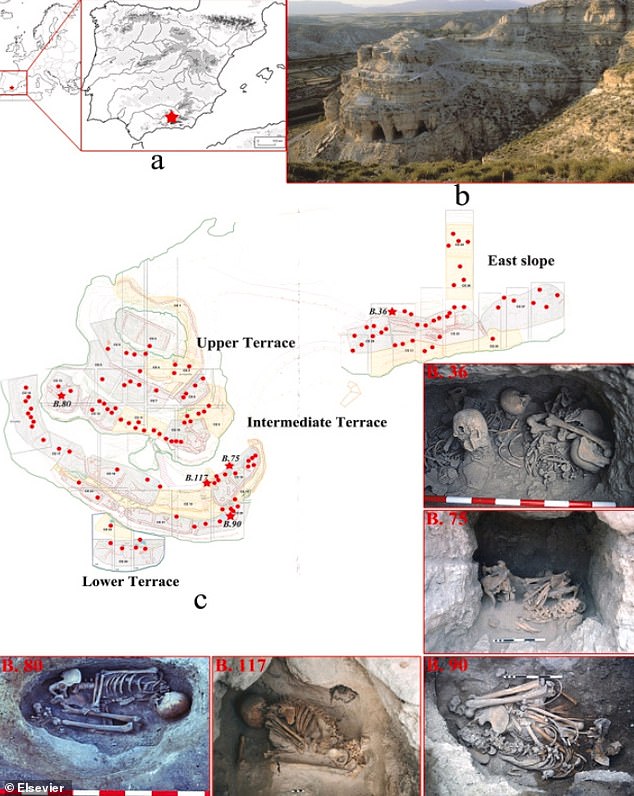 Image (a) shows geographic location of Castellón Alto site.; b. Hill where the site is located; c. Map showing the excavated burials of the site and images of the individuals analysed showing non-alimentary tooth use

The team used a scanning electron microscope to identify non-masticatory dental wear at a Bronze Age site – in other words, wear not induced by chewing food.

Scanning electron microscopes (SEM) use a focused beam of high-energy electrons to generate a variety of signals at the surface of solid specimens.

The technique revealed specific dental wear features, including notches, flakes and occlusal and interproximal grooves on the dental enamel, that were suggestive of plant and animal fibres.

Occlusal and interproximal grooves – those on the top and between teeth, respectively – originated from pulling and dragging flexible materials across tooth surfaces, as an extra hand in the weaving process.

In the case of occlusal grooves, the items were held between upper and lower teeth, whereas the materials were pulled around the neck of the teeth, close to the gum, in the case of interproximal grooves. 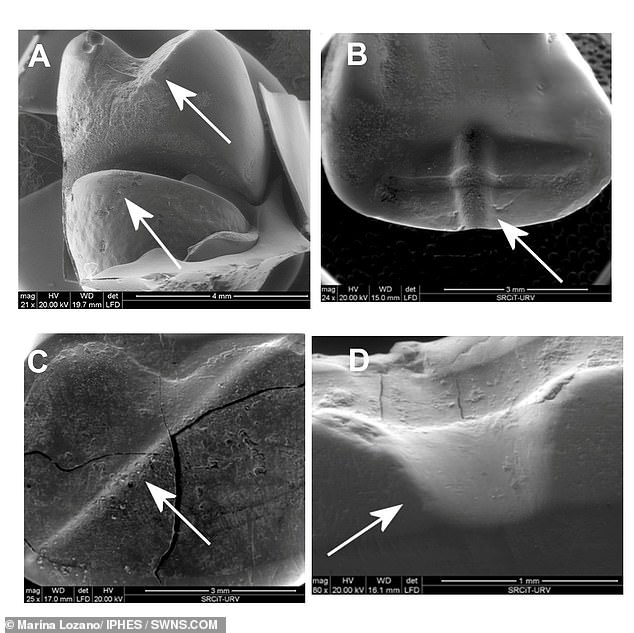 A small number of Argaric women likely specialised in handling thread from a young age, as the markings became more pronounced with age, the researchers also found.

‘The fact that this evidence was recorded in remains belonging to individuals of different ages, with more advanced wear as they get older, allows to infer that this specialisation began in their youth and that the same women continued performing these tasks throughout their lives,’ Dr Lozano said.

When exactly the sexual division of labour started is not certain, although it may be a relatively recent phenomenon, according to archaeological studies.

The findings shed light on lifestyle and complex social organisation of the El Argar culture and provide a better understanding of how teeth were used as tools during the Bronze Age.

The study has been published in Journal of Archaeological Science.

WHAT WAS EL ARGAR?

The El Argar civilisation ruled southern Spain between 2200 and 1550 BC.

The civilisation was a centre of activity in the Iberian Peninsula during the Bronze Age.

The settlement covers much of modern-day southeast Spain.

The beginning of El Argar marked the introduction of news means of production and tools, including moulds, anvils and grooved hammers.

The end of the civilisation is disputed, but it could have been due to an economic collapse from a subsistence crisis caused by the over-exploitation of their surrounding environment.