Cardiff University researchers have been studying the fossils from the last known major period of warming, when temperatures increased by 9 Fahrenheit.

During this period, known as the middle Miocene Climate Optimum, there was an increased level of volcanic activity that caused the warming.

Instead of resulting in a mass extinction, the seas were full of life – something that has baffled geologists, according to the Cardiff team.

The team say their findings suggest the worst of the effects were mitigated by rising sea levels caused by globally higher temperatures trapping carbon in the oceans. 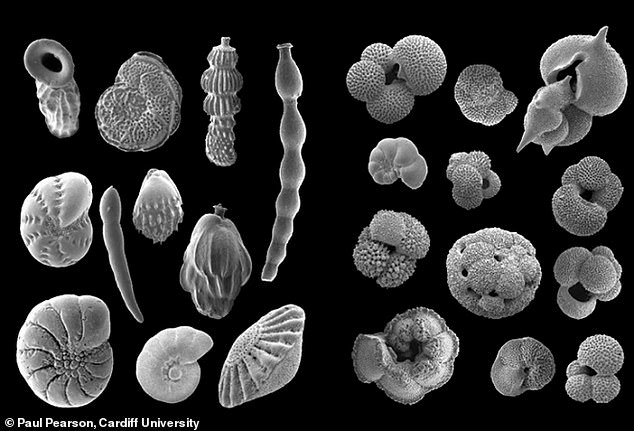 During the period, between 14 and 17 million years ago, the position of the continents were similar to today and the seas were flourishing with life.

The temperature increase of 9F is also similar to the increase predicted to happen by 2100 if there is no change in carbon emission levels.

Cardiff researchers said there was a significant oil-rich layer of rock, known as the Monterey Formation, along the coastline of California as a result of the burial of carbon-rich marine life.

‘Our planet has been warm before’, said Carrie Lear, senior scientist on the study.

‘We can use ancient fossils to help understand how the climate system works during these times.’

Professor Lear and her team used the chemistry of marine fossils taken from long sediment cores from the Pacific, Atlantic and Indian oceans to fingerprint the temperature and carbon levels of the seawater.

They found that massive volcanic eruptions of the Columbia River flood basalts released CO2 into the atmosphere and triggered a decline in ocean pH.

‘With global temperatures rising as a consequence of this, sea-levels also rose, flooding large areas of the continents’, said Professor Lear.

This created the ideal conditions to bury large amounts of carbon from the accumulations of marine organisms in sediments.

It also helped to transfer volcanic carbon from the atmosphere to the ocean over tens of thousands of years.

‘The elevated marine productivity and carbon burial helped to remove some of the carbon dioxide from the volcanoes’, said lead author Sindia Sosdian.

‘This acted as a negative feedback, mitigating some, but not all, of the climatic effects associated with the outpouring of volcanic CO2’. 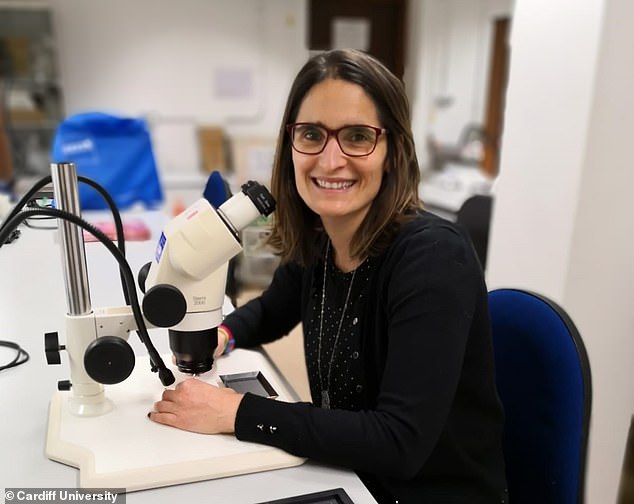 Lead author Sindia Sosdian said the slow release of carbon helped to minimise the magnitude of environmental change 14 million years ago, but that is not something we can count on in future as the climate is warming ‘much faster’

Past large episodes of volcanism throughout Earth’s history have been linked to mass extinctions and widespread oxygen depletion in the oceans, Dr Sosdian said.

‘There was no such occurrence in the middle Miocene Climate Optimum.’

The presence of the Antarctic ice sheet and the relatively slow release of carbon minimised the magnitude of environmental change, she said.

‘Thanks to our findings we now have a very clear picture of what was going on over 14 million years ago and this will change the way that scientists look at this period of global warming.

‘We know that our current climate is warming much faster than the Miocene Climatic Optimum so we won’t be able to rely on these slow natural feedbacks to counteract global warming.

‘This research is still important because it helps us understand how our planet works when it is in a warm mode.’

The study has been published today in the journal Nature Communications.

WHAT DO EXPERTS PREDICT FOR THE FATE OF THE PLANET’S PLANTS AND ANIMALS?

Nature is in more trouble now than at any time in human history with extinction looming over one million species of plants and animals, experts say.

That’s the key finding of the United Nations‘ (UN) first comprehensive report on biodiversity – the variety of plant and animal life in the world or in a particular habitat.

The report – published on May 6, 2019 – says species are being lost at a rate tens or hundreds of times faster than in the past.

Many of the worst effects can be prevented by changing the way we grow food, produce energy, deal with climate change and dispose of waste, the report said.

– Turning forests, grasslands and other areas into farms, cities and other developments. The habitat loss leaves plants and animals homeless. About three-quarters of Earth’s land, two-thirds of its oceans and 85% of crucial wetlands have been severely altered or lost, making it harder for species to survive, the report said.

– Permitting climate change from the burning of fossil fuels to make it too hot, wet or dry for some species to survive. Almost half of the world’s land mammals – not including bats – and nearly a quarter of the birds have already had their habitats hit hard by global warming.

– Polluting land and water. Every year, 300 to 400 million tons of heavy metals, solvents and toxic sludge are dumped into the world’s waters.

– Allowing invasive species to crowd out native plants and animals. The number of invasive alien species per country has risen 70 per cent since 1970, with one species of bacteria threatening nearly 400 amphibian species.