The complex grave of a Germanic lord or prince who lived 1,500 years ago during the Great Migration has been unearthed in Saxony-Anhalt, near Brücken-Hackpfüffel.

Experts say the site is the country’s most important archaeological find for 40 years and have kept the exact location of the dig a secret to stave off thieves.

Excavations got underway when builders were clearing land for a new chicken farm, and stumbled across the cemetery of a royal court.

Despite the high-ranking status of the person entombed within, the researchers have yet to locate the remains of the prince they suspect was laid to rest there.

They speculate his ashes may be inside a bronze cauldron in the central tomb, which is around 13 feet by 13 feet in size.

The cauldron, the focal point of the mounded tomb, is surrounded by six women buried in a radial alignment from the pot, like the hands of a clock, The Times reports.

Researchers say these may well have been concubines or widows belonging to the person being buried, but it remains a mystery as to whether they were slain for the burial or sacrificed themselves.

Speculation is rife about the cause of the bizarre arrangement, but researchers say it is too soon to talk of a ritualistic cult death. 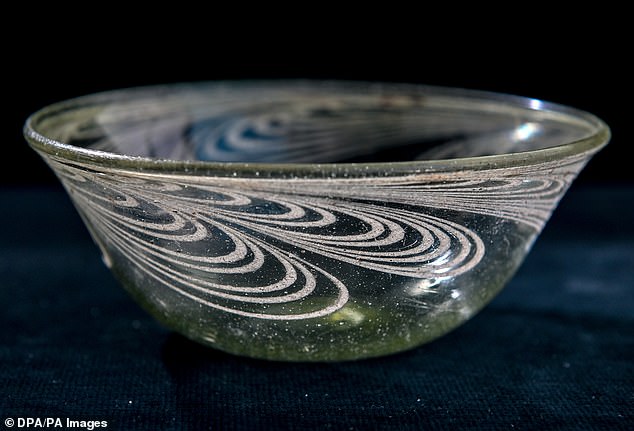 This very well-preserved glass bowl lies in the workshop of the Landesmuseum für Vorgeschichte for further examination. It was among the objects found in a 1,500-year-old tomb alongside 60 undamaged graves of a princely court in modern-day Mansfeld-Südharz 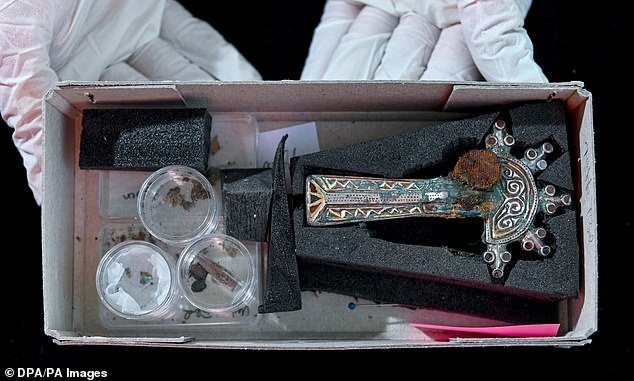 This elaborate vestment clasp lies in the workshop of the Landesmuseum für Vorgeschichte for further examination. The clips, which include pieces of snagged textile, are thought to indicate the presence of a Germanic tribe, either the Longobards, Alemanni or Thuringians

It also holds the remains of eleven animals, including cattle, horses and dogs.

Beyond this central tomb, believed to be of a high-ranking individual, are around 60 other graves, subsequently buried in the cemetery to honour the lord.

The cauldron, believed to be central to the tomb’s history, was block lifted out of the ground and will be carefully analysed in a laboratory.

‘We haven’t found the prince himself yet. But maybe his ashes are in the bronze cauldron, ‘ archaeologist Susanne Friederich from the Landesmuseum Halle said.

Also inside the central tomb are the remains of 11 animals, including cattle, dogs and horses.

These animals were reburied at this location, further indication the site was created to honour a high-ranking person in society.

It is thought the central burial chamber would have been part of a mounded tomb, with the dozens of surrounding graves added later. 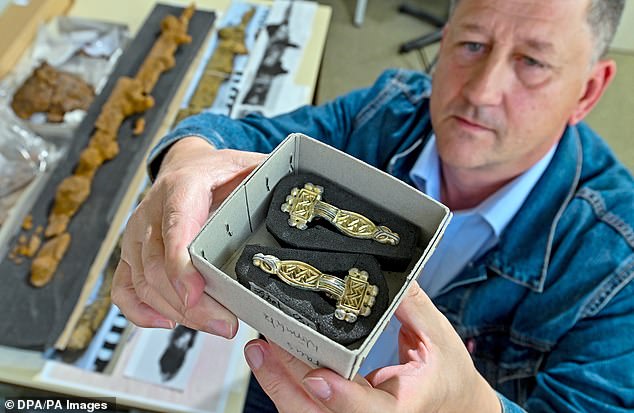 Archaeologist Arnold Muhl shows artistic vestment clasps in his workshop. The objects are 1,500 years old and come from 60 undamaged graves alongside the tomb of a Germanic lord who lived during the Great Migration 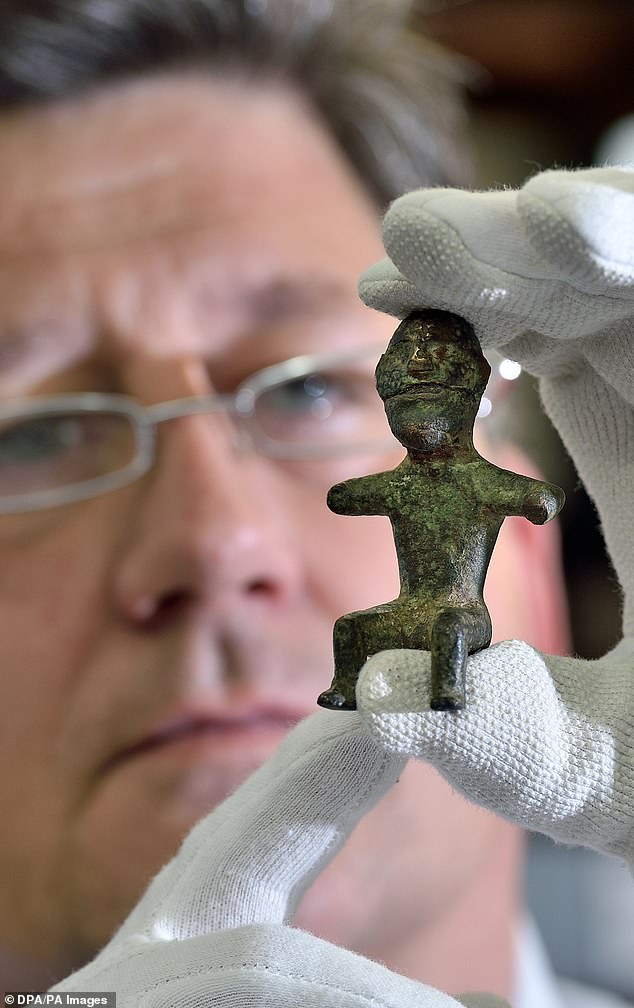 This Germanic god statue is thought to be around 1,800 years  old. The figure is likely to have been a sacred object and was buried with its owner, archaeologists believe

The Great Migration, or migration period, is when Europe was in turmoil following the demise of the Roman Empire.

It is thought to have started as early as 300AD but lasted until around 568.

During the zenith of the Roman Empire, much of Germany and its stout tribes remained uncolonised, courtesy of crucial battles won by the natives.

Visigoths, Osrtrogoths, Huns, Saxons, Angles, Goths, Vandals all ceased the moment to invade the crumbling empire from all parts.

It saw invasions of major cities, including Rome and Constantinople.

It remains up for debate whether these ‘Barbarian invasions’ were a cause or or result of the weakening Romans.

Initial estimates date the site as being from between AD480 and AD530, a period of time following the fall of the Roman Empire which saw many Germanic tribes, such as the Huns, invade territories which were no longer under Roman protection.

‘In the graves, among other things, a glass decorated bowl, a spindle whorl made of glass, several silver-gilded robe clips, a sword and a shield boss made of iron as well as a gold coin of the Eastern Roman emperor Zeno around 480 were found.

‘The pieces of glass come from the Gallo-Roman workshops along the Rhine, only they mastered this technique.’

Other finds include an immaculate pointed glass beaker adorned with curved grooves which would have housed a floating wick lamp and garment clips.

The clips, which include pieces of snagged textile, are thought to indicate the presence of a Germanic tribe, either the Longobards, Alemanni or Thuringians.

The site is in immaculate condition due to its unique location, which inadvertently protected it from damage.

The burial ground was in a natural hollow which, over time, was covered by around  four feet (1.20 meters) of sediment, which provided a protective layer.

This protected it from any ploughing and also hid it from view of any treasure hunters or grave robbers.

By analysing the bones and artefacts, the scientists hope to gain concrete insights into people’s lives at the time of the Great Migration.