(Reuters) – Wall Street ended mixed on Friday, as optimism from a surge in January U.S. job growth was offset by a weaker-than-expected outlook from Amazon.com Inc that battered retail stocks.

A U.S. Labor Department report showed nonfarm payrolls jumped by 304,000 jobs last month, the largest gain since February 2018 and beating economists’ expectations for an increase of 165,000.

That report, along with better-than-expected ISM manufacturing activity numbers for January, pointed to underlying strength in the economy despite an uncertain outlook that has left the Federal Reserve wary about more U.S. interest rate hikes this year.

“What the unemployment report is telling you is that people want to go back to work,” said Tom Martin, senior portfolio manager at GlobAlt Investments in Atlanta. “The consumer needs to be strong, and if the consumer is employed, the consumer will stay strong.”

Even as the U.S. economy remains on a stable footing, investors are concerned that a slowdown overseas could hurt profit growth, with high-profile companies such as Apple Inc warning of slower demand in China.

READ  Currys PC Word Boxing Day 2018 sale: the deals to look out for on December 26

The Dow added 1.3 percent for the week and the Nasdaq gained 1.4 percent.

Advancing issues outnumbered declining ones on the NYSE by a 1.30-to-1 ratio; on Nasdaq, a 1.37-to-1 ratio favored advancers.

Volume on U.S. exchanges was 7.5 billion shares, compared with the 7.7 billion share average over the last 20 trading days. 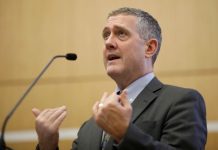