The train is the first passenger train in the world to run on a hydrogen fuel cell, which generates electrical energy for propulsion. Generating zero emission and capable of a top speed of 140 km/h the vehicle will be testing by Austria’s national rail operator, Austrian ÖBB, which is considering it as a replacement for its existing diesel powered trains.

Its Austrian debut follows almost two years of testing in Lower Saxony, Germany, where it covered more than 180,000 kilometres.

According to Alstom, as well as being completely emissions free, the Coradia iLint boasts a number of innovations including clean energy conversion, flexible energy storage in batteries and intelligent management of motive power and available energy. Designed specifically for use on non-electrified lines, it enables clean, sustainable train operation while maintaining high levels of performance. Alstom has already sold 41 of the hydrogen-powered trains in Germany.

“With its use in regular passenger operations for ÖBB, our innovation train Coradia iLint has reached the next milestone,” said Dr. Jörg Nikutta, Alstom’s CEO in Germany and Austria, at the launch event in Vienna. “The train’s emission-free drive technology offers a climate-friendly alternative to conventional diesel trains, especially on non-electrified lines. I am particularly pleased that ÖBB, a strong and long-term partner in the European mobility market, is convinced of our technology and its advantages.”

“We clearly see ourselves as pioneers in testing hydrogen technology on rail. As the largest climate protection company in Austria, we are actively shaping the mobility of the future with technological alternatives,” added Andreas Matthä, CEO of ÖBB-Holding AG.

As previously reported by The Engineer, Alstom is also working with UK firm Eversholt Rail on the development of a hydrogen train design named Breeze that will be capable of operating on UK rail networks. The firms jointly invested a further £1 million in the project earlier this summer.

Poll: which of Rishi Sunak’s measures will be of most help to your business? 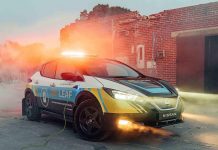