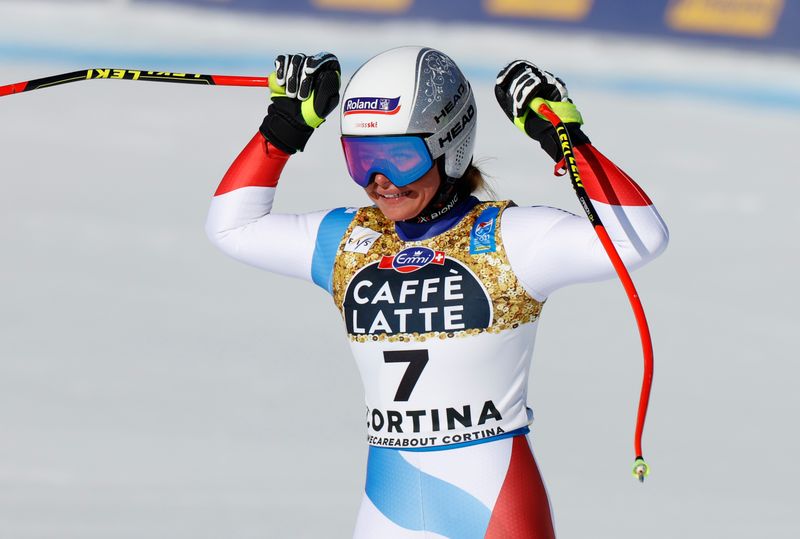 A silver medallist two years ago and also in Thursday’s super-G, won by team mate Lara Gut-Behrami, Suter started seventh and made no mistakes as she powered down Cortina’s glistening Olympia delle Tofane piste.

Gut-Behrami had to settle for the bronze after looking good for a golden double until the final stretch scrubbed off her speed.

The last Swiss woman to win a world championship downhill was Maria Walliser in Vail in 1989, and Saturday’s gold was the first of Suter’s senior career.

“My run was really good. I did what I wanted to ski, what I need to give me the space and take the speed with me so I am super happy for my run today,” said Suter, who made her experience count.

“I always knew in downhill there are more chances and then I started with a silver medal in super-G, this was already amazing for me and then today was a new day.

“I felt really good in the morning so I just knew I did everything I can,” added the 26-year-old reigning World Cup downhill champion.

Weidle, a 2017 junior world bronze medallist, was the second silver medallist for Germany of the 2021 championships after Romed Baumann in the men’s super-G.

“I love it here, the last years have been really good for me (in the World Cup),” she said. “A fourth place, sixth place, ninth place. So I knew I liked the track and everything is possible at a world championships.”

Gut-Behrami was 13th to start, knowing what she had to do to win a second gold in the space of 48 hours.

She gave it everything, with her split times well inside Suter’s until she went from being 0.12 seconds quicker at the penultimate one to 0.37 slower at the finish.

“Today it was a tight race,” she said. “I didn’t do a really perfect run, I made a few mistakes and even so I am on the podium,” said Gut-Behrami, who lives in Italy with husband Valon who plays for Serie A soccer side Genoa.

Ester Ledecka, the Czech Republic’s 2018 Olympic super-G champion, was pushed off the podium to fourth.

Italy’s Sofia Goggia, the Olympic downhill champion, was absent from her home event after suffering a knee injury in Germany last month.

Slovenia’s Ilka Stuhec, downhill world champion in 2017 and 2019 after compatriot Tina Maze’s success in 2015, was never in contention and finished 14th.

America’s top hope Breezy Johnson made a clear mistake on the upper part and finished ninth after being the early leader.

The championships in Cortina d’Ampezzo had a delayed start after the first three days were blown out by bad weather. The races are going ahead without spectators due to the COVID-19 pandemic.