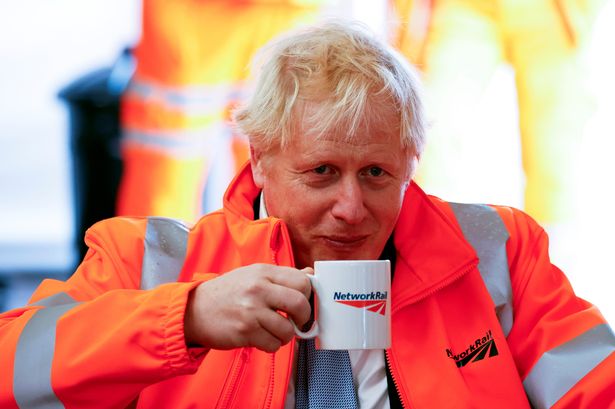 Boris Johnson is battling for survival as he braces for the impact of Sue Gray’s long-awaited Partygate report.

The top civil servant is expected to highly critical of the culture in Downing Street in her report, which has been handed to No10 this morning.

Mr Johnson is expected to make a statement to MPs once the 37-page dossier is published, before making a grovelling appearance at the 1922 Committee of Tory backbenchers.

The Prime Minister was hoping to shake off his Partygate hangover after he escaped getting another fine from the Metropolitan Police.

Scotland Yard confirmed that 126 fixed penalty notices had been handed out to 83 people for lockdown-flouting gatherings in 2020 and 2021 as it concluded its investigation last week.

The force confirmed that 28 officials received between two and five fines, with many penalties believed to have gone to junior staff.

Mr Johnson, his wife Carrie and Chancellor Rishi Sunak all received fines for attending a surprise birthday bash for the Prime Minister in No10 in June 2020.

Detectives investigated 12 events as part of the £460,000 probe, including six gatherings Boris Johnson is believed to have attended.

The Met has said fines were given out relating to events on eight dates, but this could be more than eight parties as there were multiple events held on some days.

Sue Gray investigated 16 events on 12 dates, with a handful of gatherings not examined by cops.

Here are all the parties the Metropolitan Police and Sue Gray investigated, with the events Boris Johnson is believed to have attended marked with an asterisk (*).

Boris Johnson’s former Principal Private Secretary Martin Reynolds invited around 100 staff to a bash at the height of the first lockdown to “make the most of the lovely weather “.

He signed off the email: “Please join us from 6pm and bring your own booze!”

Mr Johnson admitted to briefly attending the gathering but he claimed he thought it was a work event.

His wife Carrie Johnson was reportedly there, along with 40 others.

One witness told the Sunday Times: “There were 40 people in the garden, including Boris and Carrie. There were long tables laden with drink, crisps, sausage rolls and other picnic food. It was a proper booze-up.”

Officials gathered for a lockdown karaoke bash to mark the departure of No10 official Hannah Young.

The raucous leaving do, which is said to have resulted in a drunken brawl, saw partygoers use a karaoke machine despite singing and indoor gatherings being banned at the time.

Around 20 people attended the knees-up.

Former Whitehall ethics chief Helen MacNamara became the first person to publicly admit to receiving a fine when she apologised for an “error of judgement” in attending the event.

Whitehall enforcer Sue Gray first revealed the event had taken place at the Cabinet Office in her initial Partygate report in January.

Fines issued? Yes. This event breached the ban on indoor gatherings of more than two people.

Boris Johnson’s wife Carrie led staff in a chorus of Happy Birthday while the PM was presented with a cake at a surprise gathering in the Cabinet room.

The Prime Minister had returned from a school visit in Hertfordshire that afternoon.

Long-standing ally Conor Burns famously tried to defend the Prime Minister’s attendance by saying he was “ambushed with a cake” and was only there for ten minutes.

Boris Johnson received a fine over his birthday do
(

Chancellor Rishi Sunak has also admitted to attending but said he was there for a meeting.

Mr Johnson, his wife Carrie and Mr Sunak all confirmed they had received fixed penalty notices.

The PM and the Chancellor both apologised but refused to resign – despite being found to break the law.

Fines issued? Yes. This event breached the ban on indoor gatherings of more than two people.

Sources told the Mirror No10 aides “drank their socks off” at a gathering in Boris and Carrie Johnson’s flat above 11 Downing Street.

The flat get-together later became known as the Abba party, as the ‘Winner Takes It All’ was said to have been played to celebrate his departure.

A spokeswoman for Mrs Johnson dismissed the claims as “total nonsense”.

Fines issued? Unclear. Fines were issued for breaches of ban on indoor gatherings of more than two people on this date

On the same night, a leaving do was held for Lee Cain, the PM’s departing director of communications.

Boris Johnson is said to have given a leaving speech to say farewell to former spin doctor Lee Cain.

Fines issued? Unclear. Fines were issued for breaches of ban on indoor gatherings of more than two people on this date

December 17, 2020: Boozy leaving do for official who wrote the Covid rules

Kate Josephs, former Director General of the Covid Taskforce, was given a boozy send off by officials at the Cabinet Office – despite London being placed into Tier 3 the day before.

Bars, pubs and restaurants were forced to close but staff enjoyed a get-together “with drinks” to mark her departure from Whitehall.

Kate Josephs apologised after details emerged of her farewell bash
(

Ms Josephs, who went to work for Sheffield City Council issued a public apology earlier this year after details of the farewell bash emerged.

Civil service boss Simon Case was initially asked to investigate the Partygate scandal but he stepped aside after it emerged an event had taken place in his own office.

The probe was taken over by senior civil servant Sue Gray.

An online quiz was reportedly held for members of his private office, with around 15 guests attending.

Mr Case is understood to have not received a fine for this event.

It is understood the PM was “there for a few minutes to thank him for his service” as a “small number of No10 staff briefly said goodbye”.

The raucous Christmas party, first revealed by the Mirror, was said to have been attended by 40 of the Prime Minister’s top team.

Downing Street dodged questions for a week before bombshell video emerged of staff joking about it.

Officials knocked back glasses of wine and held a Secret Santa while the rest of the country was forced to stay at home.

Cops investigated 12 events during the pandemic
(

According to later reports, people made speeches and stayed until 2am, with Boris Johnson not present but working a few rooms away in his office.

“It was a Covid nightmare,” one source told the Mirror.

Mr Johnson claimed in the Commons that all guidance was followed, but a video emerged of a mock press conference in which press secretary Allegra Stratton joked about the knees-up and the lack of social distancing.

Fines issued? Yes. This event breached the ban on indoor gatherings of more than two people in a Tier 3 area

Sue Gray first revealed that a gathering was held in Downing Street during the third lockdown to mark the departure of two private secretaries.

The prosecco-fuelled event was said to have included a speech by Boris Johnson, who attended briefly.

Fines issued? Yes. This event breached the ban on indoor gatherings of more than two people in a Tier 4 area

Leaving events for No10 comms chief James Slack and a photographer took place and later merged on the eve of Prince Philip ‘s funeral.

Despite the Union flag flying at half mast at Buckingham Palace, Downing Street staff filled a suitcase with wine from a local Co-op and staff reportedly broke a swing belonging to the PM’s baby son Wilf.

Penalties were issued for this event at the start of April.

Fines issued? Yes. Fines were issued relating to a ban on outdoor gatherings of six or more people.

Boris Johnson, his wife Carrie and some 17 staff members were pictured in the Downing Street garden during the first Covid lockdown.

The images showed the PM sitting at a table with Carrie, his then-fiancee who is cradling their baby son Wilf, and two aides. There are two bottles of wine and a cheeseboard on a table in front of the Prime Minister.

Four other members of staff are sat around a second table cluttered with bottles of wine and glasses a short distance away.

Nine people are stood gathered on the grass around a low table. Then two other people are sitting on the floor to the right of the larger group.

Earlier that day, the-then Health Secretary Matt Hancock had advised the public to stick to the rules and not get carried away by the warm weather.

No10 always insisted it was a work meeting being held outside but there were questions about why Carrie and Wilf were there. However the PM and Carrie live at Downing Street, which meant they would be allowed to use their own garden.

Around 40 to 50 people crammed into a room in No10 for a leaving do for top aide Cleo Watson, sources told the Mirror.

Guests allegedly had drinks late into the night – and Boris Johnson popped in to give a speech. No10 refused to comment on the claims.

But Dominic Cummings, an ally of Ms Watson, claimed this was a “red herring”.

He said: “There was no party on Fri 27/11. Red herring. A staff member left their job. Walked to press office to say bye, PM bumbled in & started babbling, everyone embarrassed, dispersed.”

Up to two dozen officials gathered in the Department for Education cafe for drinks and canapes despite strict Covid curbs in the run up to Christmas.

Former Education Secretary Gavin Williamson gave a short speech at the evening event before officials and ministers knocked back glasses of wine.

One source told the Mirror: “There were lots of people gathered in the cafe area, mingling and drinking wine. It was just so reckless”.

The DfE did not deny Covid rules had been broken and admitted “it would have been better” not to have held the event while the rest of the country was banned from doing so.

The Prime Minister was pictured at a No10 Christmas quiz, sitting underneath a portrait of Margaret Thatcher as he read out questions.

Staff huddled by computers, conferring on questions and knocking back fizz, wine and beer from a local Tesco Metro. In one office, the insider said, there were four teams, each made up of six people.

It was December 15 and the PM was flanked by two members of his top team, one was wearing a Santa hat and the other draped in tinsel. 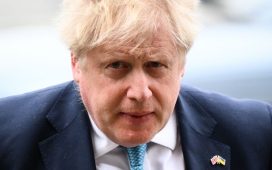 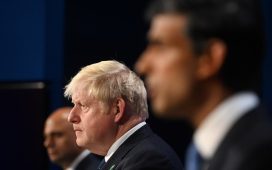 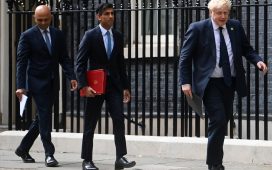 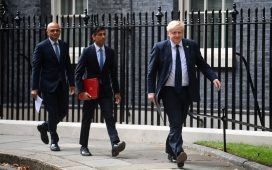