‘All schools should remain shut in England’ after London U-turn, teachers say


No schools in England should be allowed to reopen after the Christmas break to stop the rapid spread of the new strain of Covid-19, a leading teaching union has said.

The call from the National Education Union (NEU) comes after Education Secretary Gavin Williamson confirmed on Friday that all London primary schools will remain shut next week.

The union’s joint general secretary, Dr Mary Bousted, said the decision should be extended to all schools.

Dr Bousted told BBC Breakfast: ‘We know that pupils now can transmit the virus through their homes, through to their families and into the community, they’re the most effective transmitter of the virus.

‘You combine that with the new variant being up to 70% more infective than the previous Covid virus which was very infective, then it’s clear we have to do something to break the chain of rising levels of infection in our community.’

She added: ‘The danger is that by opening schools as levels of infection are rising so high and are already so high amongst pupils, then we’re not going to break that chain and our NHS will become overwhelmed so we said all schools should be closed for the first two weeks.

Mr Williamson had said the decision to close all London primary schools was a ‘last resort’.

From January 4, all primary schools in the capital will switch to remote learning for two weeks for all children except vulnerable children and those of key workers.

While the move has been welcomed as the ‘right decision’, the Government has also been accused of making another U-turn just days after it told some schools to reopen for the new term.

Dr Bousted criticised the Government for an ‘inability to even read the data’, adding: ‘It seems to me just to be inexplicable that the Government is getting this so badly wrong.’

The reopening of secondary schools that are not in Covid hotspots has been pushed back to January 11 to allow for mass testing programmes to be set up.

But school leaders are continuing to raise problems with the plan. Dave Lee-Allan, the headteacher of Stowmarket High School in Suffolk, said the rollout of testing has been ‘frustrating’, and that it would take at least a week for it to be operational at his school.

He outlined problems with space in the school building, as well as training and vetting the volunteers that have come forward to help.

Asked on BBC Breakfast whether he would open the school on a date the Government specified if he felt it was not fully prepared, he said: ‘No. It’s got to be safe. Previously the Government have been saying it would take legal action but I think in these sorts of circumstances, it should be left to the headteachers on the ground to make the right call.

‘We’re not sitting on our hands just waiting around and doing nothing, we want to actively engage in a community-spirited effort to try and reduce the virus and its transmission.

Dr Bousted said she felt it should be health professionals, not teachers, running the programme.

READ  OKN1, London: ‘These students are our future’ – restaurant review
Share on FacebookShare on TwitterShare on PinterestShare on Reddit
newscabalJanuary 2, 2021

The Guardian view on calls to reopen schools: a dangerous distraction | Editorial 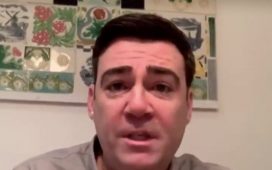