Primary school children in Covid-19 hotspots will not be able to return to the classroom as planned next week due to an 11th-hour Government U-turn.

Gavin Williamson yesterday announced the primary school reopening delays, while GCSE students’ return will also be delayed by a week.

Although the vast majority of primary schools will go back next Monday as planned, the closures will affect about one million pupils across 50 local authorities.

The education secretary said he was ‘absolutely confident’ there would be no further delays but teachers remain unconvinced and said they had been left in a ‘last-minute mess’, while one head in Basildon found out her school was closing from the TV.

Council leaders in London have also criticised the list of areas where primary schools will not open as having ‘no logic’.

Mayor of London Sadiq Khan said he was ‘urgently seeking clarification as to why schools in some London boroughs have been chosen to stay open’ while others ‘just down the road won’t’.

As the situation remains confusing for officials, teachers and parents alike, we have taken a closer look at everything you need to know so far.

Which primary schools will remain closed?

Primary schools in areas which are experiencing high numbers of Covid-19 cases will remain closed to all pupils, except those who are vulnerable or have key worker parents.

Key workers include, but are not limited to, healthcare professionals, social workers, care workers, education staff, emergency services such as police officers, and transport staff. The full list can be viewed here.

Vulnerable children include those with an education, health and care (EHC) plan and those identified as vulnerable by local authorities. The full list is available here.

If a child comes under the vulnerable category, their school must be notified.

The education secretary had said not all schools in tier four areas would have to close, insisting the measure would only affect ‘a small number of areas’.

But it later emerged the ‘small number’ was in fact 50 local authorities, where primary schools will need to switch to remote learning.

The areas affected are 23 boroughs of London, 11 boroughs in Essex, nine boroughs in Kent, two in East Sussex, four in Hertfordshire, and Milton Keynes in Buckinghamshire.

The Government had to update its list just minutes after publishing the list, as it had mistakenly missed off Redbridge in London.

Primary schools which will remain closed until further notice

There are 50 areas where primary schools will need to switch to remote learning for all but vulnerable children and those of key workers until at least January 18.

The local authorities where this guidance applies is:

When will primary schools reopen?

The majority of primary schools will return as planned on Monday January 4.

But for schools that have been ordered to remain closed in the list above, their start date has been pushed back by two weeks.

Ministers and health officials will then review the situation after two weeks to establish a start date.

Pupils not attending face-to-face classes will take part in remote learning from home.

When will secondary schools and colleges reopen?

All secondary schools in England will remain closed – regardless of whether they are in a Covid-19 hotspot.

However, the children of key workers and those considered vulnerable will return to the classroom on January 4.

All other pupils will start online learning from the same date.

The rest of secondary school pupils will go back on January 18.

Will exams go ahead?

The education secretary confirmed exams will go ahead as planned in the summer.

Asked to guarantee that they would take place, he told ITV’s Good Morning Britain: ‘Yes – that’s why we took the move to keep those children who are in those exam cohorts – those exam years, so Year 11 and Year 13 – still coming into school from January 11.’

He also confirmed BTEC exams scheduled close to the start of term will be ‘running absolutely as normal’. 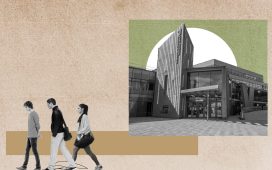