NEWSCABAL > europe > After Trump: Biden set to outline US policy to Johnson, Putin and more
europe

After Trump: Biden set to outline US policy to Johnson, Putin and more


Joe Biden will make his first overseas trip as US president this week, determined to convince allies and adversaries “America is back” after four years under Donald Trump.

Having laid out a vision of the 21st century as a struggle between democracy and autocracy, Biden’s one-on-one meetings will include the prime ministers of Britain and Belgium and strongmen from Russia and Turkey.

The 78-year-old, whose foreign policy experience runs deeper than any US president before him, steps into an arena where China is on the rise and where Trump forced once unthinkable questions about whether Washington can be trusted.

“What Biden and many of the other members of his team will have been hearing from those countries who they are trying to persuade to do this or that is, ‘How can we take America’s word for it?’” said Sir Peter Westmacott, a former British ambassador to the US. “‘Look what happened to the Iran nuclear deal: it got torn up by the next president.’

“‘What happens if there’s another Trump or a Trump clone in the White House in four years’ time? What’s the point of reaching an agreement with you guys at this stage when it’s not worth the paper it’s printed on?’ So I think they are conscious that harm has been done to America’s reputation as a reliable ally.”

After four and a half months of a hectic domestic agenda, Biden is out to make up for lost time on the international front. And whereas the first country Trump visited was autocratic Saudi Arabia, his successor’s tour through Britain, Belgium and Switzerland sends its own signal.

Biden will meet Boris Johnson on 10 June to “affirm the enduring strength of the special relationship” between the US and UK, the White House said. It will be the leaders’ first meeting in person and has potential for awkwardness. In 2019 Biden called Johnson a “physical and emotional clone” of Trump.

Westmacott, author of the book They Call it Diplomacy, observed that Biden “did not think Brexit was a good idea, did not appreciate some of the gratuitous insult language from Boris in the past about Democratic colleagues and did not appreciate much the pretty clear message they gave that they’d be very happy in No 10 with four more years of Trump. So there’s that to be parked and managed.”

The agenda is likely to include the coronavirus pandemic, a global corporation tax initiative, the challenge of China, the Iran deal and the UN climate conference in Glasgow in November. Famously proud of his Irish ancestry, Biden has warned that any UK-US trade deal is “contingent” on respect for the Good Friday Agreement.

Westmacott added: “I suspect there will be, from Biden’s point of view, not just ‘How’s Brexit going?’ but also marking the prime minister’s card on the Northern Ireland dimension. It really does matter to Biden, who’s got strong Irish Catholic credentials. He’ll want some reassurance that the prime minister does get the point.”

Biden attends the G7 Summit in Cornwall from 11 to 13 June with priorities including the pandemic, economic recovery, climate and “solidarity and shared values among major democracies”, according to the White House. It will be his first major stage to repair alliances and bury Trump’s “America first” mantra.

Leon Panetta, a former defense secretary and CIA director, said: “It’s a chance for Joe Biden to put some meat on the bone in terms of the United States getting back to the role of world leadership.

“There’s no question that trust in the United States was badly impacted by the Trump administration in the way he handled our alliances.”

Biden must heal the damage done, Panetta acknowledged. “He can, but he’s probably dealing with allies that are trying to figure out whether this is just another passing phase in the United States’s foreign policy or something more permanent.”

World leaders spent four years second-guessing Trump’s practical application of the “madman theory” of diplomacy, some massaging his ego, others keeping him at arm’s length. All may now breathe a sigh of relief.

John Bolton, a former national security adviser to Trump, said: “The takeaway for the other members of the G7 and the world at large is not that America was ever away; it’s that Donald Trump is a complete anomaly in American history and what Biden represents is a return to normalcy with a centre-left Democratic president.

“It’s not a normalcy that I agree with but a normalcy comparable on his side to, say, George W Bush on the Republican side. Trump has no ideology. He represents no coherent thinking. There is no Trumpism. He is an aberration. So in that sense, that should be comforting to the other G7.”

On 13 June, Biden and his wife, Jill Biden, will meet the Queen at Windsor Castle, her first in-person encounter with a foreign leader in more than a year. It will mean the 95-year-old monarch has met all 14 presidents during her reign but one – Lyndon B Johnson. Jen Psaki, the White House press secretary, asked on Thursday: “Who among us wouldn’t want to meet the Queen?”

Biden then travels to Brussels take part in a Nato summit on 14 June, a chance to revive America’s commitment to collective security. He also meets Recep Tayyip Erdoğan, weeks after Biden’s recognition of the 1915 Armenian genocide opened what the Turkish president called a “deep wound” in already strained relations.

Brussels hosts Biden for an EU-US summit on 15 June, an opportunity to celebrate America’s return to the Paris climate agreement and shape a common approach to China. The president will also meet King Philippe of Belgium and the prime minister, Alexander De Croo.

‘Why are we having a summit?’

Finally, Biden will head to Geneva for a potentially chilly encounter with Vladimir Putin on 16 June. Biden said in February he had warned the Russian leader that “the days of the United States rolling over in the face of Russia’s aggressive actions – interfering with our elections, cyberattacks, poisoning its citizens – are over”. In March, Biden assented to a description of Putin as a “killer”.

The meeting is also bound to be a far cry from the cosy tête-à-tête between Trump and Putin in Helsinki in 2018. Bolton recalled: “In the famous one-on-one with just the interpreters, our interpreter told us afterwards that one, Putin did almost all the talking and two, it was almost all about Syria. So I was delighted: the less Trump said, the less risk there was.”

But Bolton, founder of the Foundation for American Security and Freedom, suggests this meeting is premature.

“You meet when you have a strategy in place of how to deal with Russia and I don’t think he has one. I’m a little surprised to say that, frankly, given how many decades Biden has been involved in foreign affairs when he was in the Senate and vice-president, but I think his approach has lacked coherence.”

Others have reservations about the timing. Alina Polyakova, president and chief executive of the Center for European Policy Analysis, said: “I find it perplexing as to why we are having this summit in the first place. Usually, under normal circumstances of diplomacy, a summit is the final piece of a negotiation, an opportunity to announce or launch some sort of comprehensive agreement.

“Right now, given the relationship between Russia and the United States, it’s very difficult to see what any sort of cooperation could look like between the two countries as our interests are diametrically opposed. The question is, what is the purpose of the summit actually? Why did President Biden suggest it?”

Biden is under pressure to address Russian cyberattacks, criminal ransomware gangs, human rights violations, intimidation of Ukraine, interference in western democracies and manipulation of energy markets. There are also areas of cooperation, from Iran and North Korea to the Strategic Arms Reduction Treaty.

Michael McFaul, a former US ambassador to Russia who attended the last meeting between Putin and Biden a decade ago, said: “It’s easy to say we’re going to raise the tough issues. It’s harder to do in practice, especially with Putin. He’s a prickly guy and he plays the whataboutism game.

“If President Biden raises Alexei Navalny [an imprisoned Russian opposition leader], which I hope he’ll do, he should be ready that President Putin is going to ask about the wrongful detention of human rights activists on 6 January [after the insurrection at the US Capitol], as his foreign minister hinted at just two days ago – incredibly cynically but that’s the way they roll.”

McFaul, now based at Stanford University in California, argued that the G7, Nato and EU-US summits will be much more significant.

“President Biden speaks about democracies versus autocracies. Obviously Trump didn’t speak in those terms, but even President Obama never spoke in those terms.

“… That is the way President Biden sees the world and so for him shoring up solidarity with democratic leaders and the free world at those three summits – he gets three bites at the apple – is in many ways much more important than this sidebar meeting that he’s having in Geneva.”

Moving on: why the EU is not missing Britain that much 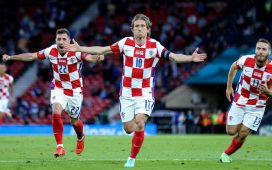 Croatia secures spot alongside England, Czech Republic in Euro 2020 round of 16