NEWSCABAL > asia > After Singapore, New Delhi in talks to launch RuPay card in the Philippines
asia

After Singapore, New Delhi in talks to launch RuPay card in the Philippines

NEW DELHI :
After Singapore, India could launch its RuPay card in the Philippines, said a person aware of the development, requesting anonymity.

On 5 March, the two countries had initiated a dialogue on how New Delhi could help the Philippines set up the infrastructure for digital payments, financial inclusion and direct benefit transfers (DBT).

The discussions on RuPay card, considered as an alternative to Mastercard and Visa, was part of this dialogue, he added. “The financial dialogue adds a new dimension to the growing bilateral relationship between the two countries, as India shares its experience on cashless economy, digital payments, financial inclusion, digital security of financial institutions and DBT with the Philippines,” he said.

India’s ambassador to the Philippines Shambhu Kumaran had highlighted the talks on creating a digital payments ecosystem at the meeting, he said. “During the meeting, the National Payments Corp. of India made a presentation on ‘Building Partnership in area of Digital Payment System between India and Philippines. This also covered India’s UPI (Unified Payments Interface) and RuPay systems.”

Discussions were held on how India could share its system for DBT using a national ID, such as the Aadhaar number, to ensure that pension and payments reach the intended beneficiaries directly, cutting down on middlemen and corruption. “The Philippines is the third-largest economy in South East Asia and a key partner in India’s Act East Policy,” a second person said, also seeking anonymity. “Despite the pandemic, which caused a contraction of 9.5% in GDP (gross domestic product) last year, the Philippines’ economy is expected to post the second-highest growth in South-East Asia in 2021, with a growth rate of over 8%,” he added.

Launched in the 1990s, the ‘Look East’ policy sought to bring India closer to emerging economies of the Association of Southeast Asian Nations (Asean) of which the Philippines is a member. In 2014, India had refashioned its “Look East policy” into “Act East policy” with added elements like extending lines of credit to buy defence hardware from India and for development activities.

“When your economy is growing and you have a big diaspora, you offer an alternative payment system for them. It builds India’s reputation,” said former foreign secretary Kanwal Sibal. Apart from US firms like Mastercard and Visa, there are a number of Chinese financial services companies in this sector, he said. India’s success in entering the markets in South-East Asia with a sizeable population of Indians is a signal that India’s financial services are coming of age, Sibal added 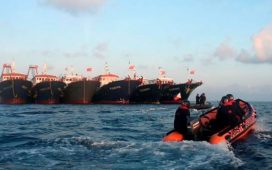