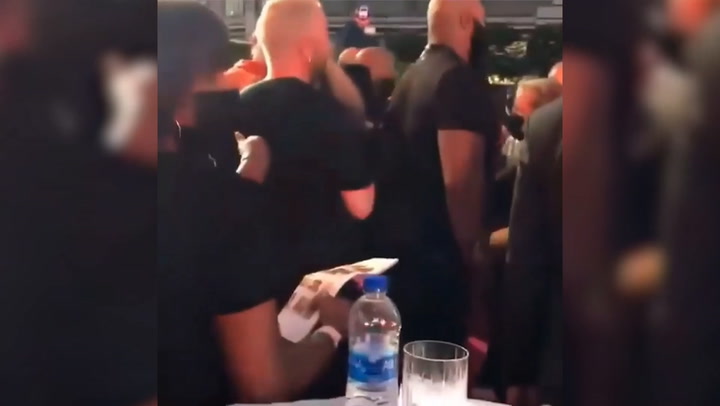 A confrontation between Oron Kahlon and Javid Basharat ahead of their fight on the UFC’s Contender Series turned ugly when Kahlon called his opponent a “terrorist”.

Basharat was frustrated with Kahlon after he missed weight by three pounds for their bantamweight fight which takes place tonight.

The two men exchanged words whilst facing off before Khalon could clearly be heard calling Basharat a “terrorist”.

As UFC matchmaker Sean Selby attempted to calm the situation, Basharat pointed his finger at his opponent and said, “you heard that, not me”.

Basharat will hope to become the third Afghani to earn a UFC contract after his countryman Siyar Bahadurzada and Nasrat Haqparast.

And Basharat promised to not give Khalon a “way out” after his offensive comment.

He wrote on Instagram : “This p**** wanted a way out by missing weight by three pounds. I told him I’m going to still whoop his a***, he then called me a terrorist.

“[He] wanted a reaction again he wanted a way out. Unlucky for him I ain’t going nowhere! I’m waiting to see him tomorrow.”

Basharat turned professional in 2016 and has since gone 10-0 fighting for regional promotions such as BAMMA and UCMMA.

He will hope to earn a UFC contract with a win against Khalon, an opportunity he expected to come earlier than it has.

He told SunSport : “I’m not going to lie to you and I don’t know if this going to sound deluded, but I thought it was going to come earlier.

“I thought it would come earlier. Even this, five years, is a stretch. I’m thinking, ‘What the hell, man? What’s going on here?’

“I only thought that because I see fighters that are 5-0, 6-0 get into the UFC. Maybe it’s because I didn’t understand the politics side of MMA.

“But in the US, they seem to get into the UFC much quicker than in Europe. We generally have a harder route.”

Basharat said he wouldn’t to “stoop” to his opponent’s level after his distasteful comment, promising to make him pay for his words in their fight.

The 26-year-old plans to fly his Afghanistan flag high in the octagon if he beats Khalon, something he knows would make his countrymen and women extremely proud

“That’s where my blood is from. You can see in the news that we don’t get our fair portrayal,” he continued.

“In fact, that’s not even necessarily the case. But there are not many good things to say about Afghanistan on the news. You don’t hear about it.

“If I can be one of those people to bring a good light to it, it’s going to be great. We’ve already got one Afghan fighter in Nasrat Haqparast and he’s doing very well.

“And I can see the joy it gives people in Afghanistan. They see a young kid raising the flag high and are happy.”