Lagos State Governor Babajide Sanwo-Olu has described the late President-General (Iyaloja) of the Association of Market Women, Alhaja Abibabu Mogaji, as a “fantastic adviser and selfless leader” that used her influence for the common good of the people.

Sanwo-Olu, who was represented by his deputy, Dr. Obafemi Hamzat, spoke during a thanksgiving at the Chapel of Christ The Light in Alausa to mark the sixth year remembrance of the late Alhaja Mogaji, noted that she was a leader and a social crusader worthy of emulating.

He urged leaders to emulate the leadership traits of the late Alhaja Mogaji, saying her legacies would only be sustained, if leaders created a society that will work for all citizens.

During his exhortation, Chairman of the Lagos State chapter of Christian Association of Nigeria (CAN), Apostle Alexander Bamgbola, urged leaders to dedicate their lives towards building legacies that will outlive them and also to devote time for righteous deeds while alive.

In his homily sermon titled: “God’s Mercy In The Midst of Adversity”, Apostle Bamgbola noted that God had a conclusion for every human’s life when he said people must always seek direction from God to live a life that would have an exemplary conclusion.

Reading from 2 Samuel 24:14, the cleric urged believers not to hesitate in seeking God’s mercy, noting that it is only through the mercy of God that a life could end with good memories.

The cleric, who stressed that Alhaja Mogaji led a life that was worthy of emulation, said the deceased left a memory that posed a challenge to people towards building on the good legacies she left behind.

He said: “After death, what is left is a memory of the deceased. And this is what people will remember about every one of us after we leave this world.

“Mama Mogaji is being remembered six years after her demise because of the good memories she left in our mind. It is the only memory that will abide forever. What memory are we leaving behind when we leave?” he said.

The cleric advised believers to strive to create memories that would make people remember them for their deeds.

President-General of Association of Market Women Mrs. Folashade Tinubu-Ojo led members of Tinubu’s family and market leaders to the service. 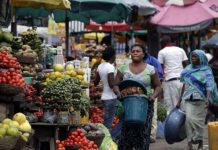 Schools to reopen in Delta when COVID-19 subsides, says commissioner

Court sentences man to death for killing his father