A brief but extremely powerful cosmic blast from a distance galaxy has taken the record for the brightest light ever seen from Earth.

It was emitted by a gamma ray burst seven billion light-years away and created more energy in a few seconds than the sun will burn in its 10 billion year lifetime.

The discovery, led by researchers from Curtin University in Western Australia involved more than 300 scientists from around the world.

Gamma-ray bursts are the most energetic events in the universe – the most massive since the Big Bang, says co author of the study, Dr Gemma Anderson. 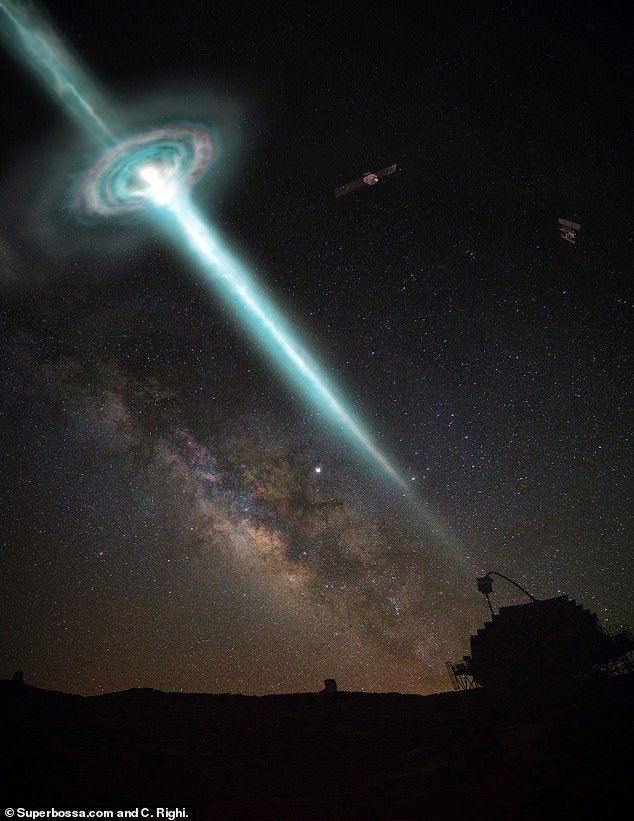 The discovery, led by researchers from Curtin University in Western Australia involved more than 300 scientists from around the world. This artist impression of the burst shows it being detected by the Major Atmospheric Gamma Imaging Cherenkov telecopes

They happen so far away they can only be detected when the beams are pointed directly at Earth and can last from a few milliseconds to a few hours.

WHAT ARE GAMMA RAY BURSTS?

They are created from some of the most violent deaths in the universe.

Long GRBs last about a minute, and scientist think they are produced by supernova: when the core of a massive star collapses to become a black hole.

Short GRBs last a second and are produced when two neutron stars merge.

‘They are likely produced by a massive star being blown apart in a supernova, with the resulting explosion leaving behind a black hole’, said Dr Anderson.

Gamma ray bursts appear in the sky without warning, about once per day.

This ‘massive burst’ reached the Earth on the 14th of January 2019 and was detected by two space satellites – the Neil Gehrels Swift Observatory built by University College London and the Fermi Gamma-ray Space Telescope.

The burst was named GRB 190114C and, within 22 seconds, its coordinates were sent to astronomers across the globe.

Astronomers at the Major Atmospheric Gamma Imaging Cherenkov (MAGIC) telescopes in the Canary Islands were the first to survey the bursts.

In the first seconds after they started observing, the two MAGIC telescopes detected particles of light from the afterglow of the burst that clocked in at between 0.2 and 1 tera electron volts (TeV). 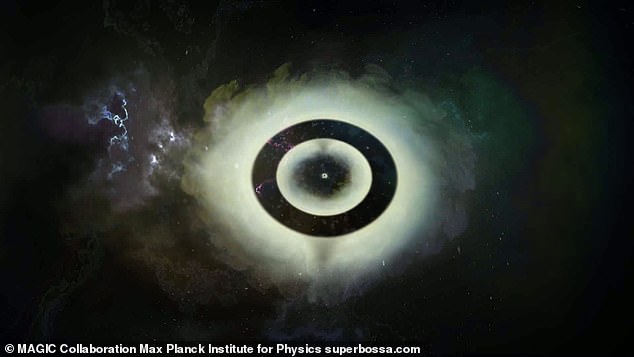 Researchers say the gamma ray bursts likely came from the aftermath of a massive supernova explosion billions of light years away, as seen in this artist impression

An electron volt is the amount of kinetic energy gained or lost by a single electron as it accelerates from rest through a potential difference of one volt in a vacuum.

The 0.2 to 1 TeV measured in the afterglow of this blast is equivalent to the amount of energy released by proton collisions in the Large Hadron Collider, the most powerful particle accelerator on Earth.

It is the first time such high-energy radiation has been detected from a gamma ray burst in the 46 years since the phenomenon was first identified.

Dr Anderson said: ‘It’s a trillion times more energetic than visible light. It makes this the brightest known source of TeV photons in the universe.’ 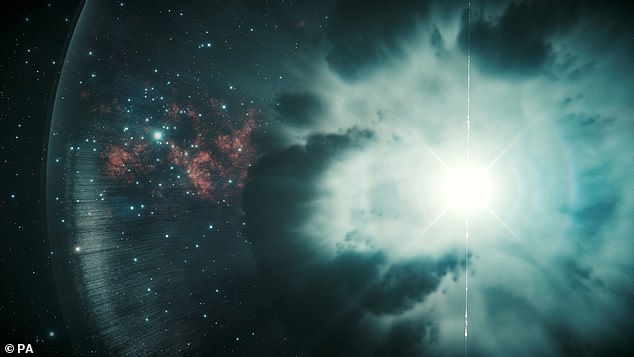 See also  Elon Musk replies 'no problem' when told it will take 10,000 nukes to terraform Mars

Gamma ray bursts (GRBs), energetic jets of gamma rays that come from black holes, can be created in two different ways – resulting in long or short GRBs. Pictured, an artist’s impression of a gamma ray burst 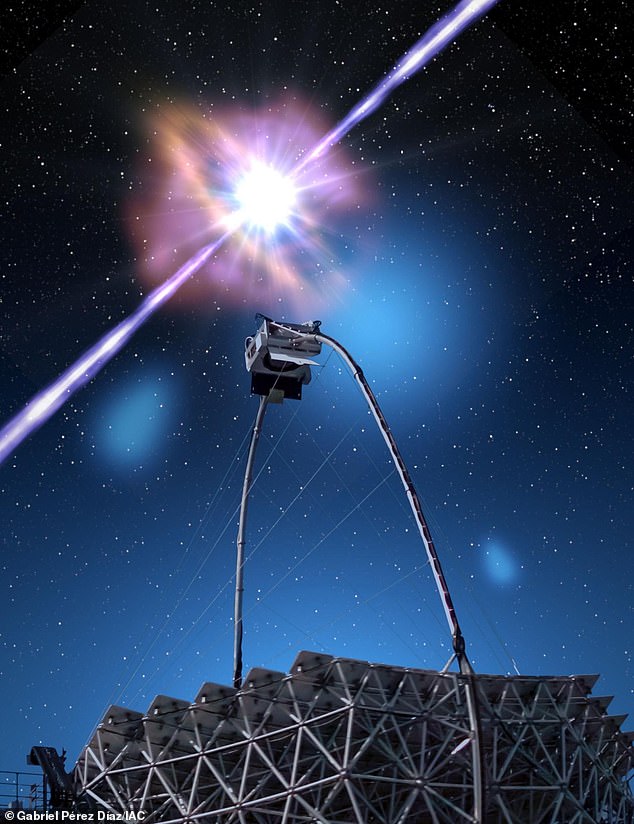 The burst was named GRB 190114C and, within 22 seconds, its coordinates were sent to astronomers across the globe. As seen in this artistic view of a MAGIC telescope with gamma-ray burst 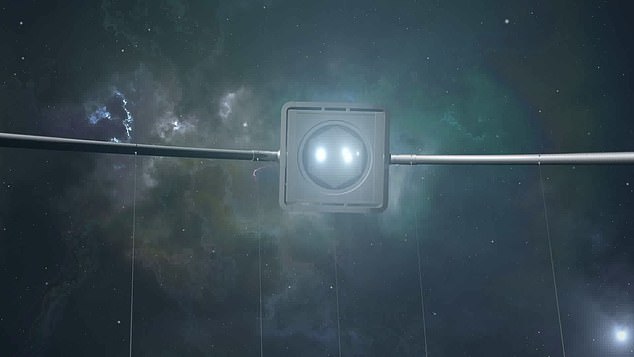 The bursts were first detected by space based telescopes, as seen in this artist impression, that then alerted astronomers on Earth who were able to point their telescopes in the right direction

The gamma ray burst was followed up by telescopes around the world, to pinpoint where the burst had originated from and its physical attributes.

Researchers hope it will shed light on the physical processes that lead to such bright explosions and the creation of black holes.

‘We’ve now seen extremely high-energy light is released in the afterglow period – something that was only predicted before in models.

The new results provide the first unequivocal evidence for a distinct emission process in the afterglow of a gamma ray burst.

It is hoped many more bursts will be detected at very high energies in the future to reveal more information about these powerful cosmic explosions. 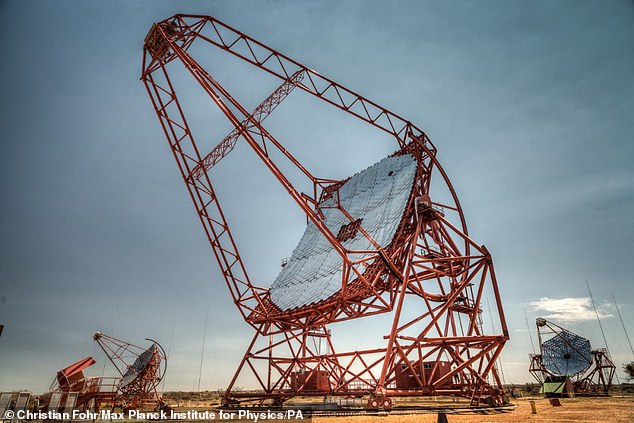 It is hoped many more bursts will be detected at very high energies in the future to reveal more information about these powerful cosmic explosions. Pictured: the HESS telescope, Namibia

See also  Blasts from the past: how ice age ponds are coming back to life

WHAT ARE BLACK HOLES?

Black holes are so dense and their gravitational pull is so strong that no form of radiation can escape them – not even light.

They act as intense sources of gravity which hoover up dust and gas around them. Their intense gravitational pull is thought to be what stars in galaxies orbit around.

How they are formed is still poorly understood. Astronomers believe they may form when a large cloud of gas up to 100,000 times bigger than the sun, collapses into a black hole.

Many of these black hole seeds then merge to form much larger supermassive black holes, which are found at the centre of every known massive galaxy.

Alternatively, a supermassive black hole seed could come from a giant star, about 100 times the sun’s mass, that ultimately forms into a black hole after it runs out of fuel and collapses.

When these giant stars die, they also go ‘supernova’, a huge explosion that expels the matter from the outer layers of the star into deep space. 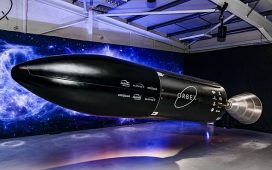 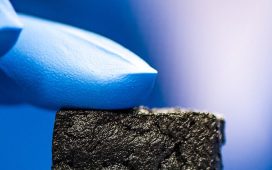 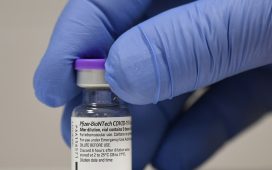 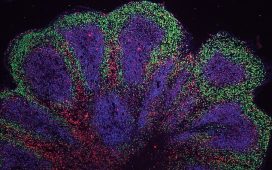 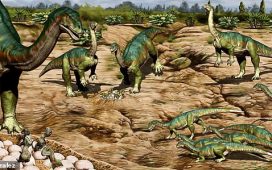