Standing like the brutalist lovechild of a factory and a multi-storey car park, the Royal College of Art’s colossal new studio building in Battersea is an arresting thing to behold. Its brawny brick flanks extend for 120 metres down the street in an unbroken line, defining a stack of raw concrete floor slabs that project out to form long covered balconies, wrapping around the building like the decks of an ocean liner. A cartoonish pair of supersized factory roof lights crowns the great hulk, trumpeting that this is a place where things are made.

Down below, a treacly black carpet of asphalt extends inside the building from the road through big, fire-station doors, while picture windows frame views into the workshops from the street, where the creative theatre of drilling, sawing and welding is played out. This is a rough, tough place, the building wants to tell you, where dirty, creative chaos can reign free. As long as you don’t screw anything into the precious brick walls or make a mess in the courtyard, that is.

Designed by Swiss architects Herzog & de Meuron, who have form with artful brick monoliths, the RCA’s new £135m complex is an apt reflection of the college’s split personality. On the one hand it wants to be a hothouse of making, a power station of physical production. On the other, it is styling itself as a hi-tech research centre, pioneering marketable “thought leadership” at the latest digital frontiers.

This dual existence is embodied in the architecture: while it looks like a factory from one side, it could be the corporate headquarters of a tech company from the other. On the south-east corner, sleek fins of white aluminium wrap their way around a cubic tower of offices, shielding a world of whiteboards, breakout pods and private phone booths. Through the windows you can see clusters of researchers plotting the future of self-driving cars, while others fiddle with drones. It feels like a startup incubator airlifted from Silicon Valley, bolted on to a refurbished relic from London’s industrial past.

Since its foundation in 1837, the RCA has been dedicated to design and fine art, but this new 16,000 sq metre building heralds its “transformation into a STEAM-focused postgraduate university” (the A for art now sandwiched between the government-approved subjects of science, technology, engineering and mathematics). As it celebrates its 185th anniversary, the college is expanding its programme into computer and materials science, robotics, advanced manufacturing, data science and intelligent mobility, keen to cement its place as “the launchpad for the world’s creative leaders,” as vice-chancellor Paul Thompson puts it.

The shift has a financial incentive. As state funding of higher education has been slashed – and artists told by Tory chancellor Rishi Sunak they might like to retrain in cyber – the RCA, like many other institutions, has been forced to become more entrepreneurial. Since Thompson took over in 2009, he has grown student numbers from 950 to more than 2,300, with overseas students now making up the majority, each paying £29,000 a year. The student body will soon increase to 3,000, while the MA courses are being cut from two years to one, accelerating turnover.

Efforts have also been directed to winning lucrative research contracts, with the college’s materials science centre recently scooping £5.4m to investigate textiles in the circular economy. The Treasury coughed up £54m for the new building, but only on the proviso that the college produces a steady pipeline of 20 new start-up companies a year. In funders’ eyes, the RCA is less an art school than a factory for forging the new creative economic pistons of UK plc. The irony wasn’t lost on the contemporary art students when they were recently kicked out of their studios early, just weeks before their final deadline, to make way for an event honouring Sunak himself.

The chancellor’s largesse was toasted in “the hangar”, a double-height space at the heart of the building, conceived as a covered street for exhibitions, events and the end-of-year show. The rolled asphalt of the road extends indoors, polished to a glossy terrazzo finish, while a mezzanine level provides views on to the action below. But it seems more designed for fundraising events than the needs of student exhibitors: the brick walls are off-limits for hanging work.

Similarly, where once the sculpture department enjoyed a messy yard, where toxic resins could be cast and molten iron poured, the workshop floors now spill on to a courtyard to which the public will be granted access, complete with a coffee shop where passersby can sit and enjoy the creative spectacle. “Opening up the college” sounds like a nice idea on paper, but the attendant health and safety implications mean that students won’t actually be allowed to make work out here. “They have ample space in the new workshops,” says Thompson. “So they shouldn’t need to work outside.”

The architects have clearly taken their visual cues from the RCA’s brutalist 1960s home in South Kensington (where some departments remain), designed by HT Cadbury-Brown, but the management might do well to remember the loose-fit culture that created it. As critic Ian Nairn wrote: “This building is meant to be used and worn and thumbed over and hugged, like the family’s big woolly dog.” Now, there is more of a managerial sensibility at play – also evident in the college’s Dyson building, built in 2012, which Thompson described as his “swanky art factory” – the desire to show off artistic activity sometimes trumping its practical needs.

Still, in the main, Herzog & de Meuron have provided versatile bones for whatever future comes next. The workshops are copious and magnificently equipped, the open-plan studio levels ample and robust. A protective 100mm concrete “play layer” has been cast on to the floor of the sculpture studios on the first floor (after recurring incidents of severed pipes and cables in the previous building), while a sturdy steel hanging grid hovers overhead. Perforated brick screens cover the windows for privacy, although they make the space feel dingy, with all the lights switched on in the middle of the day. The floor above, for Contemporary Art Practice, is a brighter place, with fully glazed walls that lead on to the long, continuous balcony, and studios demarcated with “sacrificial” timber dividers, capable of taking a good beating.

Finally the lofty top floor, flooded with daylight from the gigantic north lights, looks ideal for painting studios. Oddly, it is home to Innovation Design Engineering and Design Products. The students have yet to move in, but the modular cubicle studios suggest a place of desk-based work rather than the kind of activities that might usefully occupy the six metre-high volume. The painting students across the street are meanwhile clamouring for more space, with up to six people currently occupying studios originally intended for two.

There is no such overcrowding in the new “robotics hangar”, which connects the studio building with the research tower (to which MA students are forbidden, for confidentiality reasons). Here, there’s a vast netted space for drones, along with a water tank for submersibles, while the intelligent mobility lab next door features three large bays, allowing vehicles to be driven in off the street. “The public will be able to look in and see a snazzy concept car,” says Thompson. Several floors above are dedicated to research, with AR and VR visualisation labs, and the InnovationRCA startup hub, culminating in a penthouse level for conferences. It’s painfully fitting that the sweeping views across London are mostly reserved for external guests.

The research produced in this tower will tackle everything from the climate crisis to ageing populations, artificial intelligence and the future of cities, all central to the RCA’s new five-year strategy: “to use interdisciplinary thinking to solve global issues”. It is laudable stuff, but the college might start by addressing issues closer to home.

The last few years have seen the RCA rocked by student protests and staff strikes, even before the turmoil of the pandemic. Complaints have ranged from lack of access to facilities to valuable work being destroyed in a botched clear-out, while the high proportion of academic staff on casual contracts led some to call it “the Sports Direct of higher education”. The college recently conceded to some staff demands, but many students remain dismayed by their experience.

“I feel like I’ve been taken for a ride,” says one overseas student, who moved to London with their partner, both quitting their previous jobs. “People make a lot of sacrifices to come here, but there’s a complete lack of regard for the student experience. Everything is a fight, from trying to book one of the limited workshop slots, to accessing the studios at evenings and weekends. It’s an endless battle with the senior management, just to get the things we have already paid for.”

Others talk of the extreme lack of communication, the byzantine complaints process, and how slow the college has been to return to pre-Covid operations.

“They have accepted far too many students and it’s falling apart,” says one second-year. “I’ve never experienced an institution where all the students are so angry all the time. It’s really exhausting. They are just treating us like cash machines.”

Thompson rebuts the complaints. “It’s all about balance,” he says. “There are some students who want more space and longer opening hours, but if you asked the others if they wanted to pay extra for it, they would say no.” He says that the RCA has now appointed a new head of student experience who will work to address further concerns, and that students are being compensated for damaged work and teaching days lost to strike action.

But a spokesperson for the student union doesn’t hold out much hope: “It won’t be an easy fix. There is an underlying discrepancy between the day-to-day mechanisms of how students learn and create, and the RCA’s decision-making body that is more concerned with public perception and having a voice in the UK economy. The new building represents this kind of ‘marketable creativity’ – it feels less about student needs than making the college more attractive to business interests.”

Thompson denies that student needs have been deprioritised. “Student experience is something we take really, really seriously. During the covid years it’s not been easy, for any university or any student. The proof of the pudding is in the reception we’ve had for this building from the students that have moved in so far.”

Punchline: celebrating artists who use humor in their work 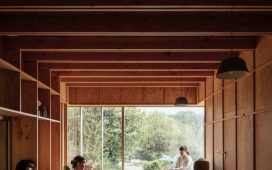 ‘Sigmund would have loved this’ – Lucian Freud: The Painter and his Family review

Imperial artwork: early photographs of life in Japan – in pictures

David Hockney: ‘My era was the freest time. I now realise it’s over’