Record 25% of seriously-ill Americans put off treatment in the last year over fears they couldn’t afford the medical bills, report reveals

A record one in four seriously-ill Americans say they have put off getting medical help because they can’t afford it.

The US provides healthcare to people who buy private insurance, pay for treatments outright or qualify for government assistance.

While around 27.5million don’t have health insurance, even many who do delayed getting help out of fear of excess fees hitting their wallets.

A survey by analytics company, Gallup, found that a third of all households in the US have avoided getting medical help in 2019.

Delaying treatment is bad for people’s health, because they tend to get worse until they are seen, and also for hospitals and the economy because sick people will end up needing expensive emergency help and are less likely to be able to work. 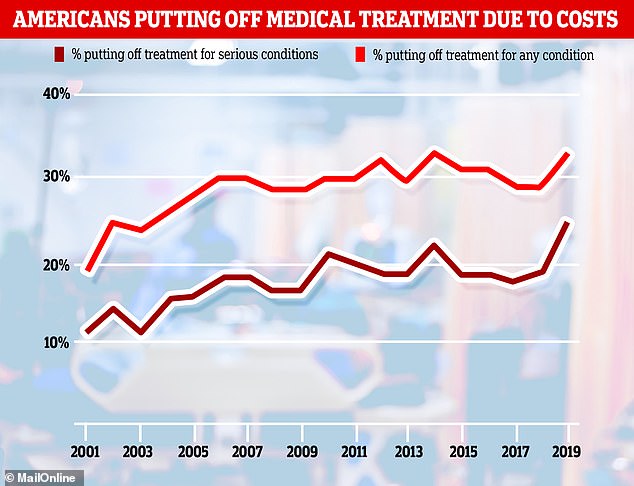 There was a steep rise this year in the proportion of seriously-ill people putting off getting medical treatment because they were concerned about the cost. The figure increased from 19 per cent in 2018 to 25 per cent in 2019

In Gallup’s poll, 25 per cent of Americans said they put off treatment for a serious medical condition because they were concerned about how much it would cost.

This rose from 19 per cent just a year ago and is higher than the 22 per cent recorded when the survey was first done in 1991. This year 1,015 people were interviewed.

Another eight per cent said someone in their family had delayed treatment for a less serious condition.

A survey published earlier this year found half of Americans had delayed a medical or dental procedure because they were so expensive. 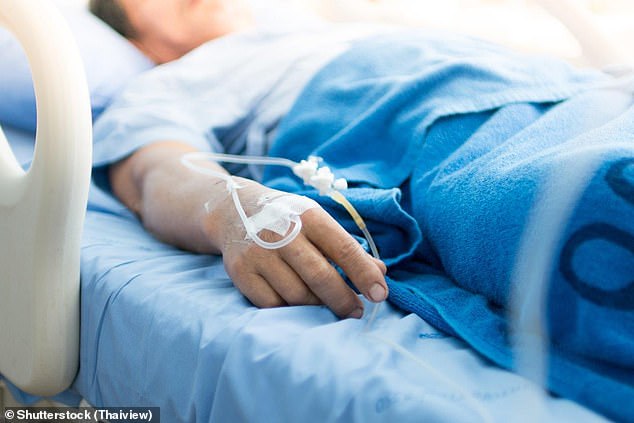 Some 36 per cent of people in households with a combined income of less than $40,000 (£30,000) per year said they had avoided healthcare because of money worries (stock image)

HOW DOES US HEALTH INSURANCE WORK?

The US does not have a state-funded hospital system like the UK but runs its healthcare through private companies.

Patients are required to pay for the medical help they receive, either directly to the hospital or through an insurance scheme.

Many people have private health insurance, which they may get from their employer, which is designed to stop them being bankrupted if they need to shell out for expensive care.

But insurance schemes come with charges called deductibles, which dictate how much the patient must pay before their insurer picks up the remainder of the bill. These can range from small amounts to thousands of dollars, so even insured patients can face hefty bills.

People over the age of 65, some disabled people and kidney failure patients can use Medicare, a government-funded insurance program.

And those who are on low incomes may qualify for Medicaid, another government scheme which provides free insurance for people who can’t afford it.

The research – a poll by dental insurance company, DentalPlans.com – found it could take people more than two years to pay off a single $6,000 (£4,500) bill.

Even people with insurance end up out of pocket if they get medical help because they have to pay deductibles – known in the UK as an excess – before the insurance companies stump up.

This had shot up from just 23 per cent in 2018, while the figure only rose by three per cent in wealthier homes.

In its report Gallup said: ‘According to the American Hospital Association, patient visits to emergency departments in community hospitals increased 19 per cent between 2001 and 2016 and has likely climbed to over 20 per cent by today.

‘While that may reflect many factors, including the aging of the population and the number of Americans living in close proximity to hospitals, it may also be indicative of a greater need for emergency care due to lack of routine care.’

And it added: ‘From an economic perspective, delayed care can have a range of negative effects, including reduced workplace productivity in the short-term, and increased healthcare costs and in the long-term – costs that ultimately burden the federal budget which has ripple effects on the economy.’

READ  Coronavirus: The one thing experts say you should stop doing - do you do this?

Coronavirus update: The long-term effects of COVID-19 could be worse than we fear

High cholesterol: The best drink to include in your diet to lower ‘bad’ cholesterol

Coronavirus immunity may only last a few months, study suggests

Coronavirus doctor's diary: Why are people remaining ill for so long?