Boris Johnson faces a number of political challenges in the autumn (

Boris Johnson spent the first week of Parliament’s summer recess trying to shift the focus away from Covid-19 onto fighting crime.

After 16 months spent battling the relentless onslaught of the virus, the Government is quietly hoping that the worst of the pandemic may now be over.

The end to remaining lockdown restrictions on July 19 and a period of falling infection rates have delivered a dose of cautious optimism – and raised hopes of a return to some form of normality.

The PM has long wanted to make progress on his domestic agenda after the virus totally derailed his first two years in Downing Street.

But it is unlikely to be plain sailing.

Mr Johnson faces a number of political headaches in the autumn if the pandemic does continue to recede.

Here are some of the battles ahead.

The £20-a-week universal credit uplift is due to be phased out in October, which amounts to an extra £1,040 per year for benefit claimants.

The boost was introduced as a temporary measure at the start of the pandemic and the Government has made it clear it always intended to scrap it.

But the decision to cut the support to some of the most vulnerable people is controversial, as many Brits continue to struggle financially after the virus wreaked havoc on the economy.

Campaigners have warned the end to the uplift will coincide with the winding up of other restrictions and could create a cliff edge, forcing more families into hardship.

Some Conservative MPs are unhappy about the move, with a string of former Tory Work and Pensions Secretaries urging the Government to make the uplift permanent.

The Universal Credit uplift is due to be axed in October
(

Another major battle ahead is the PM’s plan to make vaccine passports mandatory for nightclubs and other crowded places in September.

In a massive u-turn last week, Mr Johnson said: “I should serve notice now that by the end of September, when all over-18s will have had their chance to be double-jabbed, we are planning to make full vaccination the condition of entry to nightclubs and other venues where large crowds gather.”

Ministers have also floated the idea of making jabs mandatory for students if they want to return to their halls or attend lectures – and for football fans going to matches.

The prospect has infuriated Tory MPs, and could lead to a major Commons revolt when the plans are brought before Parliament.

However there is some suspicion in Westminster that the Government is using the threat of vaccine passports to encourage young people to get jabbed – and it may not actually happen.

The long-delayed plan for social care

The Prime Minister stood on the steps of Downing Street two years ago and promised he had a plan to fix the struggling social care sector.

But speculation that a blueprint might finally be unveiled before recess came to nothing.

Mr Johnson is understood to be considering hiking National Insurance by 1% for working-age people, to fund a cap on care costs that could stop elderly people having to sell their homes.

But critics have warned this could hit lower paid workers while protecting wealthier pensioners, effectively putting a greater burden on younger people.

Low-tax Tories could also revolt against the plan, which would break the party’s 2019 manifesto commitment not to raise taxes until at least 2024.

An overhaul of the underfunded sector is drastically needed but the way ahead looks fraught for the PM.

Defining – and delivering – levelling up

The PM has put “levelling up” at the heart of his offer to voters – but no one is very clear what it means.

In a much-hyped speech last month, Mr Johnson failed to give a definitive answer on how he plans to level up the country and stamp out regional inequalities.

He suggested handing greater powers to towns and counties but ended up asking people to “come to us with your vision about how you will level up”.

The slogan is at the very heart of the battle facing Mr Johnson – how to keep the first-time Tory voters in northern seats on side without alienating supporters in the party’s southern heartlands.

So-called Red Wall voters will need to see material changes to their lives if the Government is going to keep them on side.

But the need to spend big in the north may come at a political cost for the Tories in the shires.

It also tees up the prospect of battles with the Treasury, as Rishi Sunak tries to regain control of the purse strings at the Spending Review in the autumn.

A battle over NHS pay

The Government finally u-turned on its measly 1% pay rise plan for NHS staff by offering a 3% wage hike to nurses and doctors.

But the proposal has gone down badly with medics, with the Royal College of Nursing (RCN) warning it will in fact be a salary cut once inflation is taken into account.

Nurses and doctors are now considering whether to take strike action in protest.

A pay battle with hero medics – who are rightly revered by the public after their actions during the pandemic – would be seriously damaging for the Government.

The NHS is already under immense strain, with long waiting lists for non-Covid treatments and uncertainty over the state of the virus in the colder months.

See also  ‘I feel like such a failure after charity gave my kids Xmas presents – and I can’t even buy food’ says mum on Universal Credit
Share on FacebookShare on TwitterShare on PinterestShare on Reddit
newscabalAugust 1, 2021 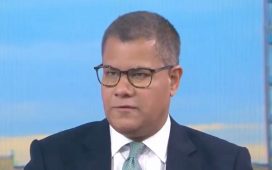