The Mini JCW GP’s wild power eruptions, the crisply sophisticated balance of the finely honed BMW 420i or the unexpected punch of the carbonfibre-rich, concept car-like BMW i3? Each of these experiences can be yours for near enough £40,000, making for quite some variety not only at the price, but also from the same manufacturer.

It’s not just that the characters of these cars are different, but so are their missions and make-up. Disparate selections of vehicles can, of course, be made from other car makers’ portfolios, not least Volkswagen for one, and Stellantis (PSA and FCA, if you’re wondering) for another. But no manufacturer offers three such utterly different cars for near-identical money.

The most mainstream model here is the 420i, a close relative of the 3 Series, if with a usefully reinforced body structure, a lowered centre of gravity, 50:50 weight distribution and a widened track to suit its more sporting ambitions. For a base price of £40,460, you get a 182bhp 2.0-litre turbo petrol driving the rear wheels (no longer a BMW constant) and an eight-speed automatic gearbox. Not an especially scintillating confection, but there’s rather more to this car than its stark spec sheet reveals.

The Mini GP’s driven wheels are at the other end, and it is (very) forcibly propelled by the same 2.0 turbo as used in the 420i, substantially strengthened and boosted here to provide 302bhp and a horizon-compacting 332lb ft. As with the 420i, it’s harnessed to an eight-speed auto – a manual would be mashed by the torque, apparently – but you get some cheap-looking paddle shifts. For the £35,345 list price, a mechanical limited-slip differential is included, and while it never totally tames this Mini’s inner tiger, it at least renders this power-crazed device drivable. The optional £2000 GP Touring Pack includes a navigation upgrade, automatic dual-zone air-con (a useful balm during dynamic workouts) and heated seats – likely to be superfluous once you get rim-wrestling. It all takes this Mini close to £40k. 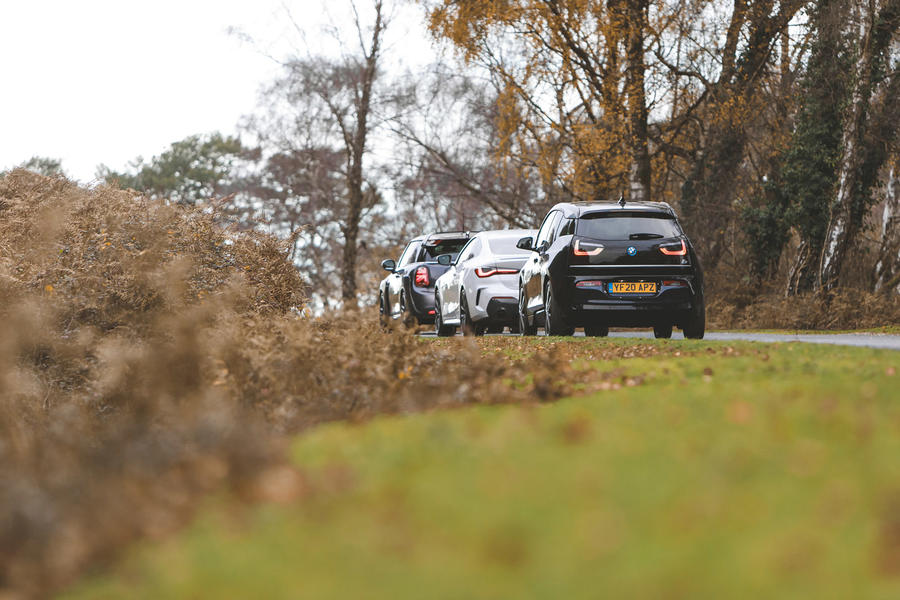 You’ll get £310 change from that £40k if you buy BMW’s standard i3. It looks much the same as the car that was launched seven years ago, but improving battery technology has substantially increased its potential. Today’s 120Ah has an official claim of 182-190 miles, which is a little optimistic in reality but nevertheless enough to allow the deletion of the i3 Range Extender offered early on.

The fundamentals of the i3 need no updating. Its carbonfibre core remains unique at this price, and an airy cabin serves an intriguing mix of artfully modern furnishings and virtue-signalling recycled stuff.

The sensation of difference is evident from the moment you switch on and hear nothing. The silence of EVs is becoming more common, but if internal combustion is what you’re used to, the i3’s placid nature will impress. So will its go, which is startling if you’re unfamiliar with an EV’s all-you-can-eat torque. This is, in fact, the second-fastest of our trio, its 7.3sec 0-62mph just shading the 420i’s 7.5sec. So it’s calming yet fast.