The seventh generation of Mercedes’ SL roadster brings back the fabric roof and 2+2 layout of earlier incarnations and receives both four-wheel drive and four-wheel steering as standard.

Set to go on sale in the UK early next year, the R232-generation SL has been developed by the AMG performance car division and is expected to share its drivetrains, chassis, electrical architecture and other key components with the second-generation AMG GT, due in 2023.

An all-new aluminium platform, consisting of a spaceframe and self-supporting body structure, provides a significantly more rigid basis than that of the previous SL, which used Mercedes-Benz’s MRA (Modular Rear Architecture) platform. Transverse rigidity is claimed to be 50% higher than with the platform used by today’s GT Roadster and longitudinal rigidity is said to be 40% higher.

“We were able to start from scratch without building on an existing structure,” said Jochen Hermann, AMG’s chief technical officer, who revealed that the new SL’s bodyshell weighs just 270kg.

A further advantage of the new platform, according to AMG, is being able to mount the engine and axles lower than before. This has led to an overall lowering of the centre of gravity for improved dynamic performance.

Arriving 67 years after the original SL was first introduced to the Mercedes-Benz line-up, the new model adopts a totally new look, with more overt cab-backwards proportions than its predecessor.

Similarities with the smaller GT Roadster are evident in the overall silhouette, although Mercedes’ design team has sought to give the new SL its own individual appearance through the use of unique detailing, including a heavily structured front bumper, AMG’s signature Panamericana grille with louvres that open and close depending on cooling requirements and angular, CLS-style adaptive LED headlights in an aggressive-looking front end far removed from that of the outgoing sixth-generation model.

To help reduce front-axle lift at speed, AMG has also given its new roadster an active front spoiler. The carbonfibre element, hidden in the underbody ahead of the engine, automatically extends downwards by 40mm at 50mph to create a Venturi effect, while a large active spoiler element is integrated into the trailing edge of the boot, deploying at five different angles from 50mph onwards to enhance downforce.

Further back, the long, probing bonnet with two prominent power domes is heavily reminiscent of earlier SL models. It stretches back to a heavily raked windscreen featuring a sturdy frame that acts as protection, together with two pyrotechnic-deployed structures fired from the rear bulkhead, in the case of a rollover. The wheel arches protrude from the body, housing alloys ranging from 19in to 21in in diameter. 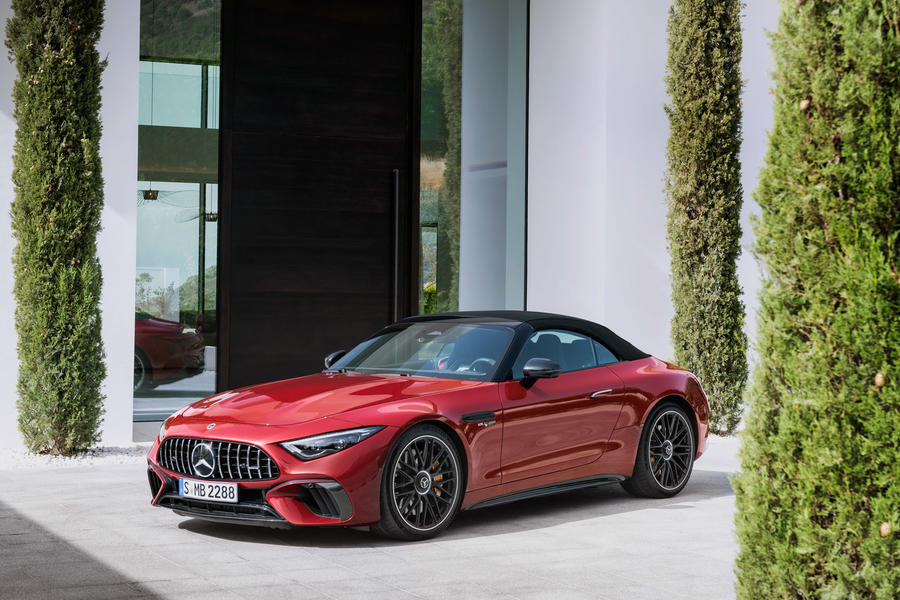 For the first time since the fourth-generation SL, the new model features a triple-layer fabric roof. Claimed to weigh 21kg less than the metal roof used by the previous generation, it is operated by a switch on the centre console or via the infotainment display, upon which an animation shows the progress of the drop-top operation. The new fabric roof, which features a heated glass rear screen, stows in a dedicated well at the rear of the cabin, taking a claimed 15 seconds to fold completely.

Freed of the task of having to house the more space-intensive metal roof, the rear of new SL takes on a more shapely appearance than in recent generations. Boot capacity is significantly reduced, though, varying from a nominal 240 litres when the roof is up to 213 litres when it is lowered – a respective 264 litres and 155 litres less than offered by the outgoing SL. However, AMG counters any loss of practicality by suggesting the new rear seats can be used for passengers up to 5ft tall – injecting a degree of family appeal that hasn’t applied to previous generations.

Mercedes-AMG has confirmed two initial V8-powered SL models – the SL55 4Matic+ and SL63 4Matic+ – although Autocar can confirm others, including a petrol-electric hybrid-powered  SL63e, are under development and due to be unveiled within the next 12 months.

The entry car, which returns the ’55’ name to an AMG model for the first time since the G55 ceased production in 2012, is powered by AMG’s M176 engine, as used by a number of models throughout the standard Mercedes-Benz line-up. The twin-turbocharged 4.0-litre V8 unit delivers 469bhp and 516lb ft of torque – 26bhp more and the same torque loading as the twin-turbocharged 4.7-litre V8 used by the old SL500 that it effectively replaces. 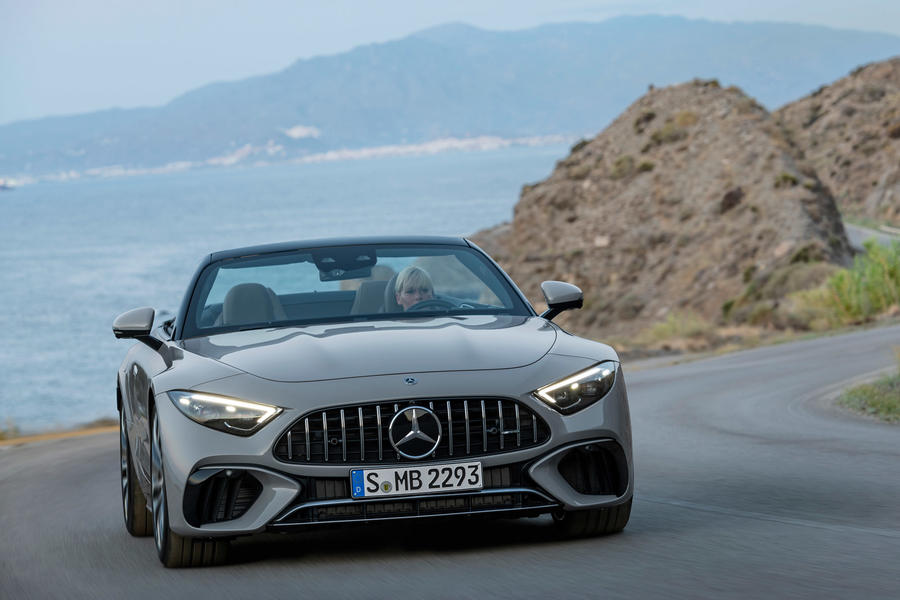 In combination with a standard nine-speed torque-converter AMG Speedshift MCT automatic gearbox and a fully variable AMG Performance 4Matic+ four-wheel drive system, the less powerful of the new SL’s V8 engines is claimed to provide the SL55 with a 0-62mph time of 3.9sec and a 183mph top speed.

There are five standard driving modes – Slippery, Comfort, Sport, Sport+ and Individual – with an additional Race mode for the SL63 and the SL55 fitted with the optional AMG Dynamic Plus package.

Dimensionally, the new roadster has grown. Its 4705mm length, 1915mm width and 1359mm height represent respective increases of 88mm, 38mm and 44mm. The wheelbase has grown the most, though, extending by 117mm to 2700mm to accommodate the new rear seats. Despite the adoption of the new aluminium platform, kerb weight has also increased, in part due to the adoption of four-wheel drive. The 1970kg of the range-topping SL63 is 125kg heavier than its predecessor. 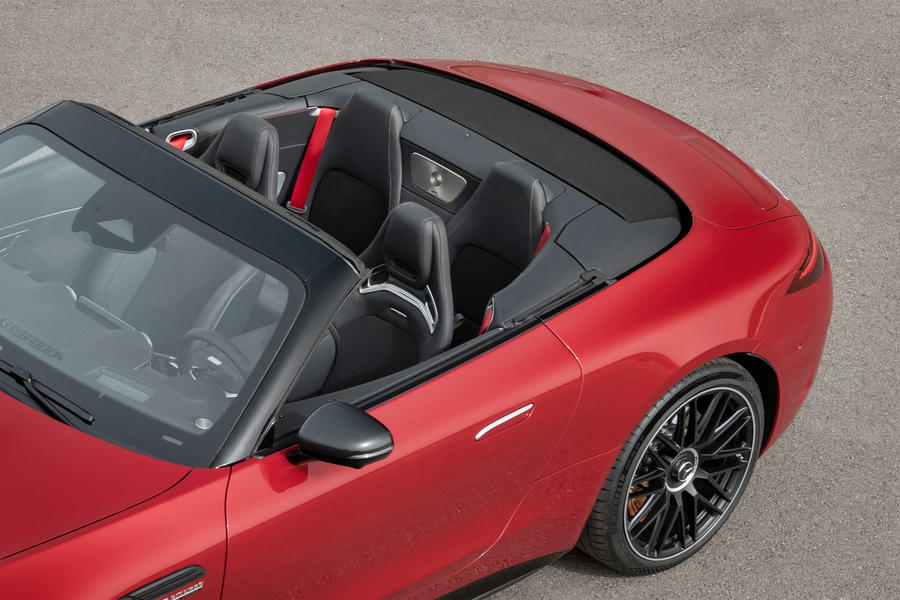 AMG says it has focused a lot of development work on heightening the SL’s dynamic attributes. The new model receives an all-new five-link, double-wishbone front suspension set-up in combination with a multi-link rear arrangement similar to that used by the existing GT. The SL55 has conventional anti-roll bars while the SL63 uses hydraulic elements to counteract body roll, both in combination with adaptive damping as standard.

The SL63 boasts an electronically controlled limited-slip rear differential, which can also be specified for the SL55 as part of the optional AMG Dynamic Plus package.

The steering system represents the biggest departure from the old SL, though. Together with a reconfigured electromechanical system on the front axle, the new model also adopts active rear steering as standard for the first time. As with the system used by the AMG GT R, the rear wheels steer in the opposite direction to the front wheels at speeds of up to 6mph, and in the same direction above 62mph, bringing what AMG describes as “both agile and stable” handling attributes.

Both models feature 390mm vented and cross-drilled steel brake discs with six-piston calipers up front together with 360mm steel discs with single-piston floating calipers at the rear. Buyers can also specify optional carbon-ceramic discs measuring 402mm at the front and 360mm at the rear.

Inside, the SL follows Mercedes’ recent arrivals – namely the EQS, S-Class and C-Class – in adopting a prominent, 11.9in vertically oriented touchscreen, which can be adjusted to sit at angles between 12deg and 32deg. It runs the latest generation of Mercedes’ MBUX operating system and offers a range of display choices – including bespoke AMG and soft-top display modes.

The touchscreen is paired with a 12.3in LCD driver display and an optional head-up display behind the AMG twin-spoke steering wheel, while the optional AMG Track Pace programme serves as a ‘virtual race engineer’, recording more than 80 sets of data, including speed, acceleration, steering angle and brake force, up to 10 times per second while on track.

Elsewhere, the SL gets AMG’s turbine-style air vents and ‘aviation-inspired’ instrument panel, electrically adjustable sports seats and an Airscarf function that directs warm air towards the head and neck of front occupants to combat any buffeting with the roof down.

Prices for the new arrival have yet to be confirmed but are likely to be comparable with the current AMG GT Roadster, which starts at £119,990.