NEWSCABAL > lifestyle > 12% of people haven’t had any sexual experiences in the last three years, according to a study
lifestyle

12% of people haven’t had any sexual experiences in the last three years, according to a study


The top 10 reasons why Brits aren’t having sex have been revealed.

Sexual wellness brand LELO put together a Sex Census based on research over 2020 and found that 12% of those surveyed haven’t had an intimate sexual experience (be it a kiss or sexual intercourse) for over three years.

Tiredness, mental health and ageing were just some of the top reasons Brits might choose to not have sex.

The pandemic is an obvious factor as to why this may have been the case during 2020, but there are a whole other host of factors affecting Brits in the bedroom.

Young people aged 18-24 have been most impacted by feelings of anxiety. 42.5% of people in this age group said their sex life has suffered, as opposed to just 12.7% of those ages over 65.

Further showing the impact of mental health and wellbeing on Brits’ sex lives, LELO separately found in April 2020 that 76.5% of people reported not having more sex than usual, despite being in lockdown with their partner.

By the end of 2020, over a third of those surveyed said stress, depression and anxiety were affecting them sexually. This Works found similar results in one of their surveys.

These are the most common reasons for not having sex.

Tiredness is the factor that just edges mental health, as over 35.7% said this was the main roadblock in their sex lives.

As the boundaries of work and home life have been increasingly blurred over the last year, it makes sense for Brits to be feeling more tired and burnt out, with less sexual drive.

33.6% of people said poor mental health was preventing them from having a fulfilling sex life.

This Works found stress alone contributed to 57% of people not feeling in the mood for sex. It’s clearly a common experience.

25% of those surveyed by LELO said body image and a lack of body confidence
impacted on them.

Those aged under 35 were most likely to feel this, as nearly a third reported these concerns.

There’s nothing wrong with having a lower libido in general – everyone’s sexual drives are different and will likely fluctuate throughout their lifetime.

However, 19.4% worry this has affected their sex life. It’s important to remember that your expectations around other people’s sex lives are usually going to be far off the reality. It’s best to just do what feels right for you.

As the body ages it’s going to physically change (which is likely to have a psychological impact too), and 18.3% of people say this impacts their sex lives.

Men experience a decrease in testosterone while women experience the menopause – something that will be touched on later.

16.1% of people said work was leaking into their home and personal lives, with technology acting as a ‘tired wheel’ in a relationship.

When work pressures are high, it affects our ability to switch off and not feel distracted. Feeling in the moment during sex is likely to suffer.

The menopause comes with a range of symptoms that can impact mood, plus the body’s physical responses and arousal process. Symptoms vary person to person.

14.5% of women surveyed said the menopause was getting in the way of their sex lives. Gynaecologist with intimate wellbeing brand INTIMINA Dr Shree Datta says common signs of the menopause include night sweats, vaginal dryness, pain during sex, and joint or muscle pain.

12.6% said medications they were taking affected how they felt sexually.

Common medications include SSRIs (widely used antidepressant) which for some might affect their sex drive.

Having children around the house accounted for 11% of Brits feeling as though their sex lives were suffering.

The pandemic has seen increased demands on parents with teaching being brought into the home, leaving parents with less time alone to be intimate.

9.4% of Brits worry about how they perform in bed, with the worrying then inadvertently leading to problems sexually.

It makes up for one of the most common reasons people seek psychosexual therapy, according to LELO.


MORE : These are the four types of intimacy – not including sex – in relationships


MORE : 24 sex fantasy suggestions to spice things up in the bedroom 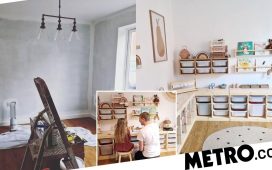