11000 bank branches in Southeast Asia to shut over next decade


The shift to digital banking is putting physical outlets out of favour in Southeast Asia – with a fifth of the region’s brick & mortar branches expected to close over the next decade. A new Roland Berger report takes a closer look at these trends.

Money transfers, payments, loan applications, financial advice and a host of other banking services can now be accessed online – eliminating the tedious visit to the local branch. Convenience was the biggest driver of this shift before 2020, now combined with the safety of managing affairs from home amid infection risks.

Banks that have been investing heavily in digitalisation – and losing hefty sums to credit losses and flattened interest during the pandemic – can now cut costs by shedding some of their brick & mortar cost base. Embodying this strategy are banks in Southeast Asia, where Roland Berger expects 11,000 branch closures leading up to 2030 – around 18% of the current physical banking presence. 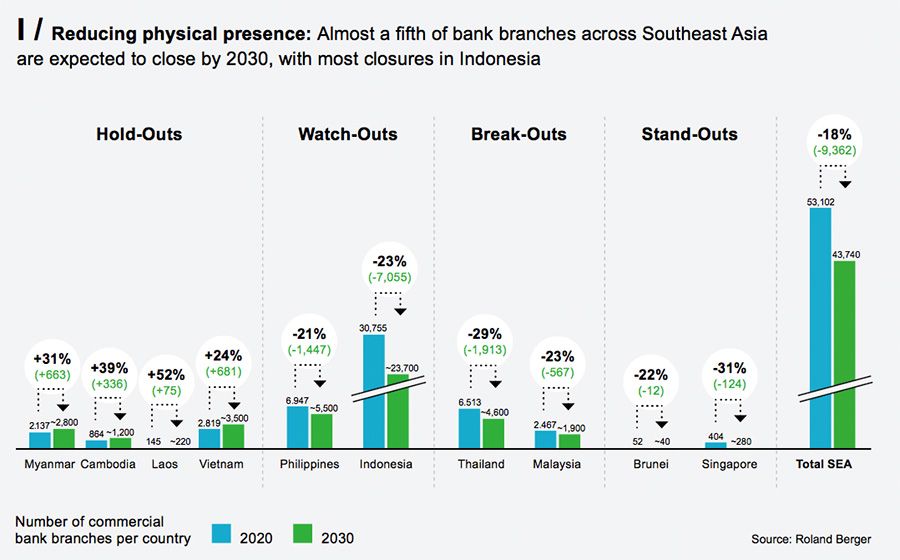 Closures will vary by country – based on a range of factors laid out by Roland Berger’s Singapore-based senior partner Philipe Chassat.

“Indonesia, Thailand and Malaysia will see a significant branch consolidation as their economies continue to grow, government regulations/incentives facilitate more digital banking activities and banks speed-up their efforts to adjust their existing large branch networks after having been slow to do so in recent years.”

These markets – alongside Brunei and Singapore – will see a closure rate of between 20% and 30% over the next decade. Indonesia will see the highest cut by volume – more than 7,000 branches – while Singapore will record the highest percentage closure at 31%. By contrast, Vietnam, Laos, Cambodia and Myanmar will all see an upward trend in physical presence till 2030 – continuing a steady climb from the last decade.

“As a consequence of their relatively underdeveloped banking sectors, these countries currently have the lowest branch densities in Southeast Asia. As such, an increase in branch footprint and an associated increase in financial inclusion are expected as the banking systems in these markets further develop,” explained Chassat. 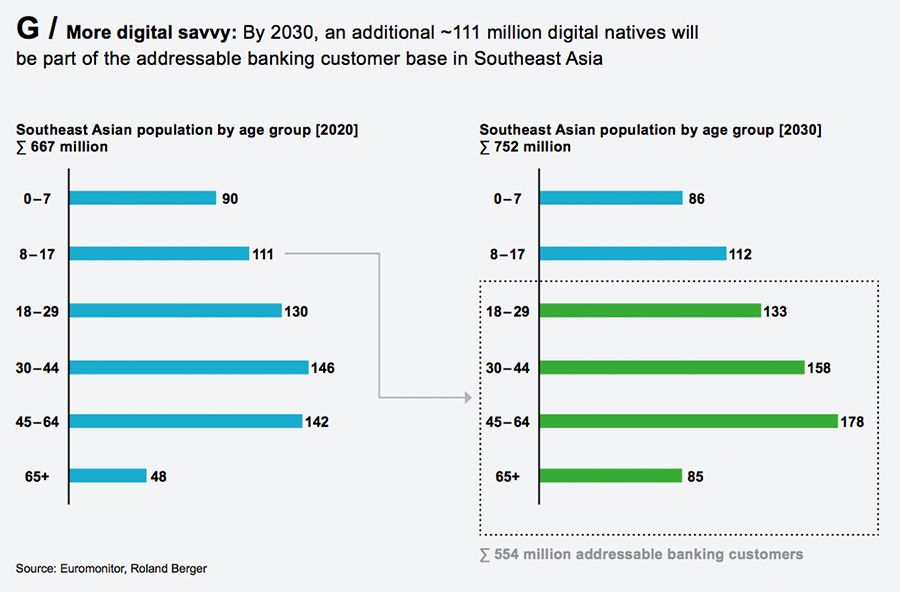 That said, the aggregate physical presence across Southeast Asia is in for a dip. Economic factors aside, the researchers highlight how this shift is largely driven by a young, digitally inclusive population across the region. At current rates, an additional 111 million digital natives – now between the ages of 8 and 17 – will enter the bankable population by 2030.

Comfortable with tech, and served by a whole host of new digital banking tools, these ranks of young consumers will likely drive many of the region’s physical branches into obscurity – bringing Southeast Asia up to speed with the global banking landscape.

Per the report, advanced economies across North America and Europe have recorded a steady decline in brick & mortar banking over the last ten years. North America’s commercial bank branches per 100,000 adults has dropped by around 6,000 since 2010, while Western Europe has registered a staggering ~40,000 decline over the same period. 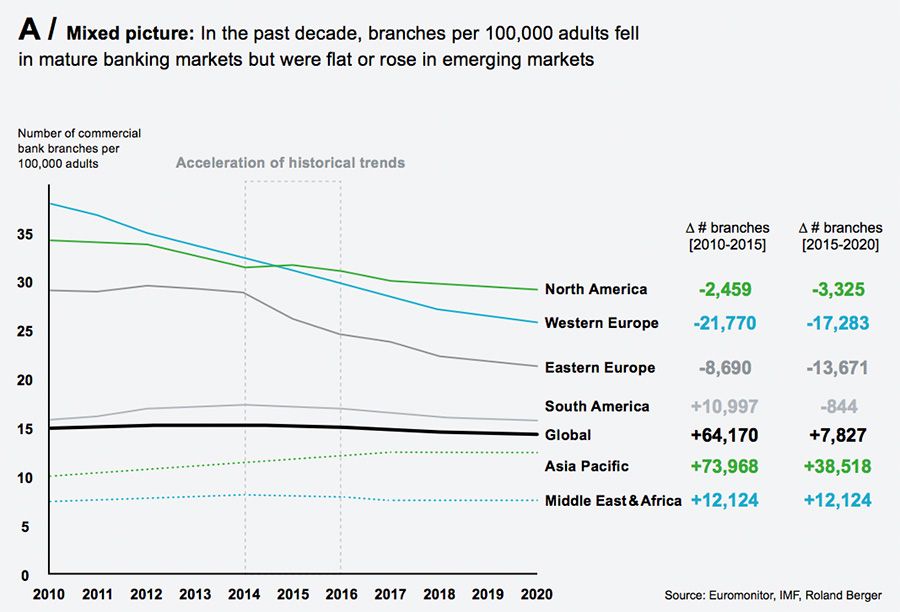 Asia Pacific’s physical banking presence has been increasing over the last decade, and Southeast Asia is now leading the region towards a more digitalised, efficient and inclusive banking landscape. Branches that remain will likely take on a whole new avatar as advanced links in a complex, omnichannel, customer-centric service offerings.

“Banks must be prepared to radically rethink their branch networks for the next ten years,” concluded Chassat. ”They need to address the upcoming challenges of the decline of the branch role sooner rather than later, preparing for a redesigned, repurposed and reduced network. Failing to do so will profoundly impact retail banks’ profitability, leaving oversised branch networks underutilised.”